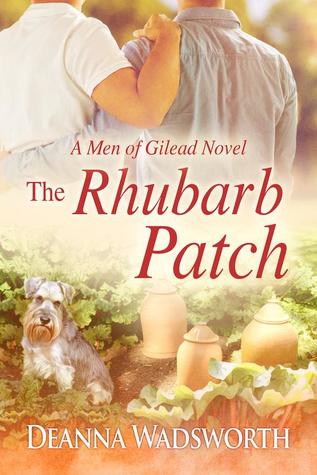 City boy, sci-fi novelist, and recovering pushover Scott Howe doesn’t know what to expect when he inherits his grandmother’s house outside the quaint village of Gilead, Ohio—but it isn’t an enormous bald man in nothing but tighty-whities and orange rubber boots shouting at him to keep his weed whacker away from the rhubarb patch.

Scott has never met anyone like Phineas Robertson: homesteader, recluse… Republican. A tender—if unlikely—friendship grows over the summer while Phin and his schnauzer, Sister Mary Katherine, teach Scott about life in the country and the grandmother he never knew. Opposites attract, but widower Phin worries his secret will send Scott running faster than his politics, and Phin isn’t convinced he deserves a second chance at romance.

Scott is convinced—rural life, and his one-of-a-kind, older neighbor is the future he wants. Before he can settle in, his mother drops a bombshell that strains their already tenuous relationship, and a cousin who believes he is the rightful heir to the property puts Scott in danger. It’ll take a lot of compromises, and even dodging a few bullets before they’re out of the weeds, but nurturing something as special as true love always takes hard work.

The Rhubarb Patch has everything I dislike in a book, like literally everything. When I thought that there is nothing that is going to go wrong, bam! There was another thing I didn’t like.

So you may ask, why the high rating?

Just because I don’t like stuff like Mpreg (although is not actually part of the plot, Scott one of the MCs, is an MM novelist who writes about Mpreg-Sci Fi’s) or Republicans who are pro-guns (the other MC, Phineas, Phin) or knowing about the rural life, that doesn’t mean others will not enjoy it.
In my honest opinion, this book is more a textbook 101 about agriculture. You’ll find every little detail, and I mean every…little…detail about seeding, harvest, farm animals and so…(did you know that you could keep the eggs up until five months in the fridge? well I didn’t…).

Scott inherits his grandmother’s house, and he moves there, running from his past relationship. Well, he is a people pleaser, and he wants to change that. He’s a momma’s boy. Like in most parts I just wanted to shout at Scott to grow the f… up. He’s also a social media addict. Checking on his followers couple of time a day, posting about the country life and he likes googleing. He doesn’t think to find love in the middle of nowhere.

Phin is a widow. His husband passed away a few years ago and now he’s living in Gilead. (The story says that Scott’s mom was going back to his family after her husband was abusing her when Scott was a small boy. The so called hubby is the son of Scott’s grandma from whom, he inherits the house. I thought that meant that Phin was the one who moved, several years ago to the neighborhood. But in one point of the story, it’s written that the grandma moved in next door…it’s confusing I know…).

So this is a typical-not-so-typical love story with a lot of details about agriculture and jealous family, rude relatives and a lot of rhubarb.

Who do I recommend this book? Well, to everyone who likes agriculture!