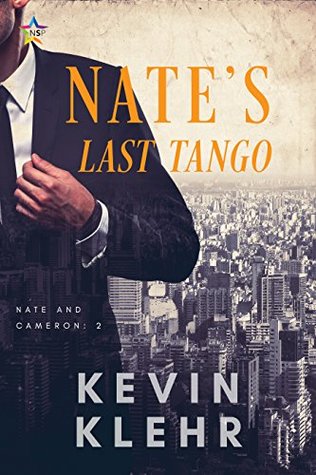 Nate’s life couldn’t be better. He’s living with his rich boyfriend, Cameron, in New York while being wined and dined all over the city.

But when Nate decides to visit his friends back in Sydney, Cameron suggests they break it off for a while. Cam’s cross-dressing butler is not impressed, and with the help of his lesbian aunt, they drag Cameron down-under to sort out his relationship and take in the sights of Mardi Gras!

With Nate at a loss to what went wrong, he faces the dim reality that love may have run its course.

Nate’s Last Tango’s the sequel to Nate and the New Yorker by Kevin Klehr. The book’s well written and nicely edited, and it had a great flow to the storyline.

I had high hopes for this book after reading the first one. The blurb for this book does a great job of giving us an idea of what to expect from the book unlike the blurb for Nate and the New Yorker. And I have to agree with this line from the blurb. With Nate at a loss to what went wrong, he faces the dim reality that love may have run its course. Because for the life of me, I can’t understand why these two people are still together. They’re both a little immature and have issues communicating. Both believe that drinking large quantities of alcohol will make everything better, but it doesn’t. And instead of dealing with the issues in their relationship and whether they should stay together, they’re worrying about who loves each other more. And they keep going on vacations to stay in the honeymoon phase of their relationship.

The book had me at times rooting for them to work out their relationship and then one of them would do something which would make me face-palm my forehead and then I would be rooting for them to break up. The book just tugged me back and forth and even getting to the end of the book, I’m still not sure if I am rooting for them to continue their relationship or just admit defeat. They did get some very good advice from a long-term couple in Buenos Aires but only time will tell if they take their advice and stick to it or if they go back to drinking and vacations to try and fix their problems.

This book’s a very good depiction of a true to life relationship, but I have a hard time connecting with either Nate or Cameron. The book’s told in the first person from Nathan’s POV, so I had a hard time connecting with Cameron since I couldn’t see what was inside his head and there are no sex scenes so I couldn’t feel the intimate connection between them. The butler Roger/Rowena’s still a blast, although my brain needs brain bleach for that one scene (my poor eyes). And Aunt Beverley’s still a riot. I actually liked Ben and Fox in this book and found myself rooting for their friends with benefits relationship.

So if there’s a third book in the series, I will be reading it to find out what happened to Ben and Fox and hope for the best with Nate and Cameron.

*** I would like to thank the author for the privilege and opportunity of reading this ARC. My review is an honest opinion of the book ***