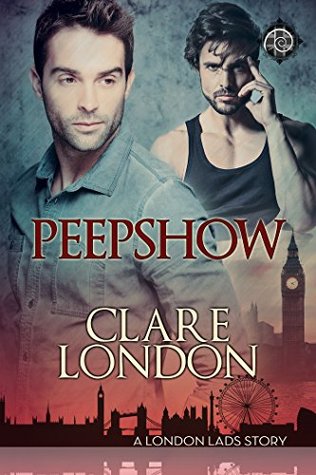 Ever wanted to spy secretly on other people’s lives?

Ken doesn’t have a choice: his student summer job is manning the CCTV screens for the new central London shopping mall. But instead of spotting criminals or vandals, he becomes fascinated by a cute waiter from the local bistro who sneaks out to the backyard for his break—and plays sexy to the camera.

Is he an old friend, or just an anonymous exhibitionist? Should Ken be excited by this naughty peepshow, or will people think he’s a voyeuristic pervert? Poor Ken’s confused and thrilled in turn. It’s like living in one of the movies he’s studying at university. He knows the man can’t see him, yet Ken feels a connection of some kind. It all encourages Ken to continue with his guilt-ridden Waiter Watch.

Ken bears the suspense as long as he can, until a chance meeting and an abortive blind date provide the explanation to the secret assignations. But will this guide Ken to a real-life chance of romance?

I like the London Lads series by Clare London, and Peepshow, number four in the series, was a good addition. I enjoyed it all the way up until it ended, but I was left wanting more. There was lots of build up to who the mysterious waiter was in the backyard portion of the restaurant that was teasing the CCTV cameras, but after the big reveal then the story went really fast and I wanted to know what happened to the couple afterward when they started dating.
I did really enjoy Ken and his group of friends. Simon the matchmaker, and Roger who’s just come out of the closet and is making up for lost time by sleeping with everybody. And as part of his matchmaking skills, Simon tells Ken about a former high school student that has come down from Oxford College on break and is trying to look up old students to find out what they have been up to.

But Ken can’t exactly remember what the former high school student looks like anymore, and his friend Simon says that he no longer looks like he did in high school. And, of course, Ken can’t help but wonder if the mysterious waiter’s actually the former high school student. But he can’t tell for sure because the waiter never gives him a clear shot of his face. I did like how conflicted Ken felt about watching the waiter and how he felt like a voyeur and a peeping tom. He’s both disgusted and excited by it and finds himself looking forward to his shifts to find out what the waiter’s going to do next. All the while, Simon’s trying to hook Ken up with the former high school student. But when Ken finally finds out the identity of the mysterious waiter, he still isn’t sure how he should feel. And he can’t help but feel that the waiter isn’t just performing for Ken like he says he is but that he’s performing for whoever’s watching. Will Ken be able to conquer his fears and trust the waiter and have a relationship with him or will he let his fears get the better of him and let it destroy the relationship before it has a chance to start?

There are a couple of hot scenes in this short story which I really enjoyed, but I wanted to know what happened next. Maybe the author will continue their story sometime, and I will get my questions answered. I would love to see what happens to these characters. I was also kind of disappointed that the story ended at page 42 when I thought it was going to page 54 and that 12 pages were used to promote the next book in the series and the other books in the series. That was part of the reason I was surprised that the story ended when it did. I thought I was going to have another 12 pages of story and then it was just over.

I was just like, no, I wanted more. But for those 42 pages, I was nicely entertained