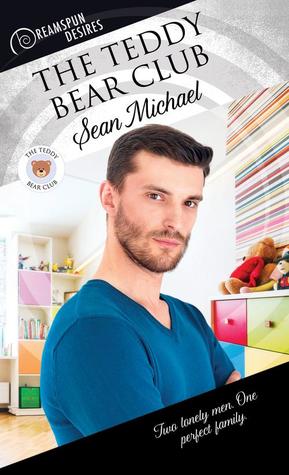 Aiden Lake adopted his institutionalized sister’s two daughters, and he’s a good dad. He works nights on websites and gets in his adult time twice a week at the Roasty Bean, where he meets with other single gay parents.

Devon Smithson wants to be a good dad now that his sixteen-year-old sister asked him to babysit her newborn… three months ago. But he’s overwhelmed with the colicky baby. An invitation to the daddy-and-kid gatherings at the café is a godsend. The pot is sweetened when his friendship with Aiden develops into more—maybe even something that can last.

But the mother who kicked Dev out for being gay wants to get her claws into the baby, and she doesn’t care if she tears Dev, Aiden, and everything they’re building apart in the process.

I loved The Teddy Bear Club by Sean Michael. This book’s vastly different from the Iron Eagle Gym series that’s a BDSM series. The Teddy Bear Club’s a cute story about a group of single dads that are trying to find their way and keep their sanity. The book’s easy to read, kept me entertained, had lots of feels, and it looks like it’s the first book in a new series, so I am super excited that the other friends in the Teddy Bear Club will be getting their stories also. I can’t wait to see who Logan, Zack, and Dirk end up with. This book’s well written and nicely edited, and it was a joy to read. It has a great storyline and just enough stolen moments of ecstasy to make it realistic with two single dads that are juggling two babies that aren’t old enough to crawl yet and one older helpful 3-year-old.

I loved Aiden and his back story about how he ended up adopting his sister’s two kids when she had to be institutionalized and what a great dad he is to them. I love that they have a support group at a friend’s café called the Roasty Bean where he meets with other single gay parents at the daddy-and-kid gatherings held twice a week. He’s able to get his caffeine fix and his adult conversation fix at the same time. Aiden’s definitely the Mr. Fix-it of the group, and he develops a fast friendship with their newest single gay parent, Dev.

I loved Dev. He’s the new single dad of the group, and he’s at the end of his rope dealing with a 3-month-old colicky baby and is seriously sleep deprived. He’s been on his own since he was kicked out of the house at 16. He’s from a very religious family. And his mother’s a piece of work. His 16-year-old sister asked him to babysit for her new born son three months ago and hasn’t been back for the baby since. Devon’s excited when he gets invited to the daddy-and-kid gatherings at the café. He isn’t sure what to expect but what he finds is a great group of guys that are willing to help him in any way that they can. Logan’s a lawyer and is willing to help him with adopting his sister’s baby and helping him locate her so that she can sign her rights over to him.

His biggest fears are realized when his mother comes for the baby. But Dev will do everything in his power to keep that from happening, and Aiden’s there for him when he needs a place to stay. And they find that their families work well together.

I loved the story. It had just enough angst, just enough passion, and just enough of a heart-warming story that had me fall in love with both of Aiden and Dev, their kids, and the other members of the Teddy Bear Club. Great job, Sean Michael, on the start of a great new series. I can’t wait to read more.