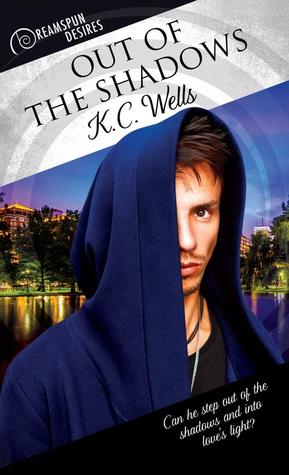 Can he step out of the shadows and into love’s light?

Eight years ago, Christian Hernandez moved to Jamaica Plain in southern Boston, took refuge in his apartment, and cut himself off from the outside world. And that’s how he’d like it to stay.

Josh Wendell has heard his coworkers gossip about the occupant of apartment #1. No one sees the mystery man, and Josh loves a mystery. So when he is hired to refurbish the apartment’s kitchen and bathrooms, Josh is eager to discover the truth behind the rumors.

When he comes face-to-face with Christian, Josh understands why Christian hides from prying eyes. As the two men bond, Josh sees past his exterior to the man within, and he likes what he sees. But can Christian find the courage to emerge from the darkness of his lonely existence for the man who has claimed his heart?

Do you ever read a book and think that it was exactly what you needed in that moment in time? Like a mug of hot chocolate on a cold winter’s night, filling your whole body with warmth and happiness, or a big hug from someone when you’re feeling low, letting you know that you are loved, and everything will be okay. Well, this book gave me all of that and more. Every atom of me was practically radiating joy, comfort and love while reading this stunningly beautiful story. I can’t believe the way I’m feeling now that I’m finished. It’s strange because I’m not sad that it’s done because I seriously can’t stop smiling. Normally I would be having a bit of mood dip because I loved the book and didn’t want it to end, but this story had the opposite effect, it’s left me with an emotional high that I really didn’t expect. It was bliss.

Christian Hernandez is basically a recluse. After an accident eight years ago that left him with serious burns and scarring, he hides away in his apartment and never leaves. He’s so afraid of other people’s reactions to how he looks, that he’s cut off all physical contact with the outside world. His groceries are delivered to the outside of his door, where he then takes them in after the delivery person has left. If he needs to leave the house when he feels like the walls are closing in, he leaves it until late at night when most people are back in their homes, and he can disappear in the shadows. The highlight of his days is watching one of the handymen that works around the grounds of his apartment building tending to the gardens. Christian has an attraction to the man but knows he’s safe being able to admire him from behind his patio blind. When he receives a letter from the apartment housing association telling him that his kitchen and bathrooms are going to be renovated, Christian’s world is thrown into a tailspin. He resigns himself to being locked away in his bedroom for as long as the work takes.

Josh Wendell has heard the stories and gossip about the resident in building 197. How he never leaves the house and how no one has ever seen him. But Josh never usually pays attention to rumours or other people’s opinions and likes to make up his own mind. When Josh is promoted by the housing association to upgrade the apartments, he discovers that he’s going to be working in the home of the mystery man. After a couple of days of conversation through locked doors, Josh and Christian start to become friendly and are able to laugh and joke with each other. But when Christian falls coming out of the shower and injures himself, the two men finally have their first face to face encounter.

Through their common interests, and with the help of Josh’s friends, Christian begins to come out of his self-imposed solitude and to become part of the big world again. He pushes his boundaries far beyond what he ever thought possible and learns that life can be so wonderful if you let your worries go and just enjoy what it has to offer.

There’s so much I want to say about this book, but I really don’t think I can fully express how much I loved it with just words. Christian made my heart want to break into a million pieces. His loneliness was often too much to take because he was just existing and not living each day. Josh was like sunshine on a rainy day when he entered Christian’s life. He gave Christian something he needed, but that he didn’t realise he was missing until that day. There were so many parts throughout the story that had me giggling and grinning, you would think I was a love-struck schoolgirl. The connection between Josh and Christian was so incredibly sweet that I couldn’t help but feel all warm and fuzzy with each and every word I read.

A huge and very well deserved 5 stars for this book and author. I don’t think I’ve ever felt this happy and joyful at the end of a book, and I think it’ll be a while before I come down from the cloud I’m currently floating on. But while I’m here, I’m going to enjoy every second of it, just like I did with this story.