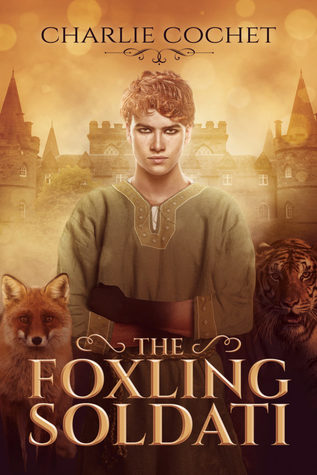 Foxling Toka has served the Soldati king for centuries, and now he attends to the kingdom’s cherished Soldati prince. It’s a position of honor, and as Toka helps the once-human prince adapt to their magical realm, he finds joy in their friendship. He also grows bolder in his encounters with Rayner, Soldati warrior and the king’s second. But the laws are clear: servants and Soldati are not permitted to mate. It doesn’t matter that Toka lost his heart to the dashing cad long ago.

Rayner never imagined he would fall in love with a servant, but the clever and beautiful foxling has ensnared him, and he resents the regulations keeping them apart. When an arrogant and spiteful king visits from a neighboring realm, Rayner is in danger of losing everything. But Soldati warriors don’t surrender, and he intends to fight all the harder to keep Toka where he belongs—in Rayner’s arms.

This is book 2 of the series.

We know from the previous book from the same series that the Soldatis are tiger shifters who are fighting against demons to protect the human race and other beings.
In the Soldati’s realm is a monarchy with a well-established hierarchy that is respected for thousands and thousands of years. But then comes Riley (book 1) a human, the mate of the Soldati’s King and with him, come changes…

This second book is about the king’s enforcer, Rayner and Riley’s personal servant Toka. Toka is not a tiger he is a foxling. The foxlings always have been the servants of tigers. But Toka harbors feelings toward Rayner, and he knows that nothing is ever gonna happen between the two of them.
Rayner head over heels in love with Toka, but as he’s the right of the King, knows he will never have Toka because he is to marry someone as high ranking like he is.

Although the foxlings are respected in Soldati kingdom, we can’t say for other kingdoms in this realm.
When a neighbor King visits with his entourage, who has out for Rayner, things get a bit complicated to say at least. Time will come when Rayner, and not just him, must protect what he knows belongs to him.

This is a sweat fast read, and I can’t wait for the next in this series!

What I didn’t like? That it was damn short!