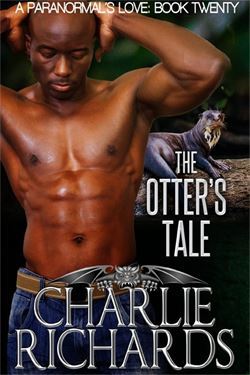 Into the Paranormal World: Getting lost in the woods, an otter shifter discovers a treasure beyond value.

While helping out some of his buddies, Aziel Boltson learns the creatures that go bump in the night are real. His mother’s stories are true–gargoyles, shifters, and more actually exist. The local paranormals–a gargoyle clutch–have an estate north of town. Aziel loves using the natural wildlife as an outdoor gym, lifting tree branches and swimming in the pond. Spotting the pond’s local gator going after a huge otter, Aziel moves to intervene. He ends up injured, but it’s not all bad. The otter turns into the sexiest man Aziel has ever seen–Jerome Laguna. While he’s never been with a guy, he can’t help but want this one. To Aziel’s pleasure, Jerome claims he is his mate. Unfortunately, a prophesy of Aziel’s mother’s ears its ugly head in the form of Jerome’s family attempting to hunt him down and take him back to the Amazon. Can Aziel and his friends help Jerome escape his otter family’s clutches or will the prophesy be fulfilled, forcing Aziel to lose his one true love and his future in one fell swoop?

The Otter’s Tale’s the twentieth book in the A Paranormal’s Love series by Charlie Richards. This book’s well written and nicely edited. I always enjoy reading a book by Charlie Richards. She’s quickly becoming my go to author for a nice light hearted read. Her writing style’s easy to read and her stories have a nice flow to them. The novellas have just enough backstory and depth to her characters. And since it’s a series you get cameos from various other characters and little glimpses into their lives to see how they are doing. I really enjoyed getting to see how Tian and Roman are doing after reading their story in The Truth is even Stranger, book 19 in the series.

The Otter’s Tale is about Aziel Boltson and Jerome Laguna. Aziel’s a human and honorary member of the local gargoyle clutch. He goes to the local university with his two other friends, and they all live with the gargoyles as mates and honorary members. I was introduced to Aziel in the previous book and was excited to get to read his story and find out who his mate was going to be. Aziel’s majoring in botany with a minor in plant studies. He’s currently a junior and is on an athletic scholarship also for playing football. Aziel’s straight. Imagine his surprise when he learns that his mate’s male. God, I love those mate hormones and how they help with any awkwardness or confidence issues.

Jerome’s always had a problem with being bullied by various members of his pod for being gay. He’s used to it, but when the bullying starts to affect his family members also, Jerome leaves his pod and searches for another shifter group that’s gay-friendly and will allow him to join them. Jerome’s a giant otter and over five feet in his otter form. During his travels, he comes to a new town and inquires about ponds and fishing holes, in the hopes that he will be able to let his giant otter form come out and play since it has been two weeks since he’s been able to change. He gets directions at a local diner to an area of ponds and fishing holes and goes to investigate. Little did he know that it was part of the local gargoyles territory and that it’s Tristan’s, an albino alligator shifter, pond that he would be swimming in.

All hell breaks loose when Tristan, in his alligator form, scares Jerome in his giant otter form. And Aziel just happens to be there collecting plant samples for one of his classes and comes to the otter’s rescue and gets hurt in the process. Come to find out that Aziel’s Jerome’s mate. But Jerome’s pod’s coming for him. Will he get to stay with his new mate or will he be forced to go back to his pod with its bigot of an Alpha? You will just have to read the book to find out what happens next.

I just wish the book was longer. I’m hoping that Aziel and Jerome will have a cameo in the next book so I can see how they are doing. I can’t wait to see who the next book in the series is going to be about. Another great book by Charlie Richards.