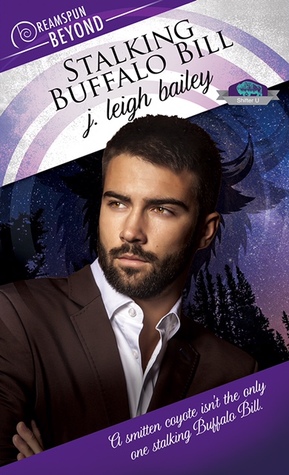 A Shifter U Tale

A smitten coyote isn’t the only one stalking Buffalo Bill.

A buffalo walks into a cafe. Sounds like the start of a bad joke, but for coyote shifter Donnie Granger, it’s the beginning of an obsession. Donnie is a little hyperactive and a lot distractible, except when it comes to William. He finally works up the nerve to approach William but is interrupted by a couple of violent humans.

While William—don’t call me Bill—is currently a professor, he once worked undercover against an international weapons-trafficking ring. Before he can settle into obscurity, he must find out who leaked his location and eliminate the thugs. He tries keeping his distance to protect Donnie, but the wily coyote won’t stay away.

It’ll take both Donnie’s skills as a stalker—er, hunter—and William’s super-spy expertise to neutralize the threat so they can discover if an excitable coyote and a placid-until-pissed buffalo have a future together.

When strangers come to town asking around about William, Donnie does everything to protect his buffalo.
This book cracked me up. Donnie is funny, completely crazy, hyperactive with a hyper imagination too and a little problem with staying focused.
He’s also adorable and wears his heart on his sleeve. I love this character, so alive.

The book is written with Donnie’s point of view, so we share every thought with him and Its worth it. Sometimes, I had the feeling that I was in my own head, it was scary!
William can be tough, and seems to be sometimes (ok most of the times) an asshole, but he has his reasons to act like that with Donnie (that doesn’t mean I didn’t want to throat-punch him, buffalo or not).

It was a pleasant read. Donnie is so adorable, and the differences between William and Donnie are funny. One is a big taciturn quiet man, the other is a hyperactive chatty man. They seem to have nothing in common, but that’s what I loved about this book, they are perfect for each other, they complete each other.
Donnie helps William to not be so serious all the time, to have fun and William helps Donnie to stay focused when it matters.
And since I’m a big romantic, how William explains his feelings to Donnie was so beautiful that he stole my little heart (and my mood too when I realised in real life it’s never happen to me)

It was a real pleasant book, I had a smile all my time reading, and I look forward to reading more.

4 OptimuMM’s for Buffalo Bill and his Gay Coyote.