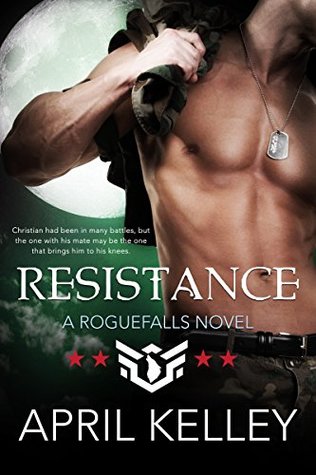 Christian has never had a serious relationship in his life. He doesn’t plan to start with an alpha wolf shifter who thinks he can dictate what Christian is and isn’t going to do. Ward Malone might trigger every warning bell Christian has, but he also triggers every sexual fantasy. Christian wouldn’t mind giving in to Ward if fun was all he wanted. Unfortunately, Ward is an all-or-nothing kind of guy.

Christian Martin is a human military man. He lives on Roguefalls Island, an island full of shifters, and he’s a member of team five with his best friend, Dylan.
Ward Malone is an Alpha wolf shifter. When he decides to visit his baby brother Rudy, mated with a human military man, he wasn’t expecting to meet his own mate. Christian Martin, is a beautiful, stubborn man, and also very human.
Ok, people, I have a confession. I love shifter books (yes ok, you already know that) but I also love military’s books (ha ha, you didn’t know that). So a book with shifters AND military, and your Ivy is just happy.

I love this book, it was short yes, but it was good.
Christian is hot, strong, loyal, but he has one rule, No Relationships. So when he meets Ward, and, Ward, as alpha he is, tries to boss him around, Christian refuses it, and fights it with everything he has.
Ward is lost with Tristan, he’s used to being in charge, being the Alpha, it’s genetic for him, so when the little human pushes him, he doesn’t know what to do.

It was funny to read how they argue together, how Christian, even if he tries to deny it, is still attracted to Ward.

It was a good story, like I said earlier, it was short, so the author doesn’t develop too much, but the story was coherent. The fact that the feelings are strong from the start between them, was also coherent, it’s the bond thing between them. The author chooses deliberately to write a short story about shifters, so even if I love when we have times to understand the characters their past and all, here it wasn’t a problem for me, it was just the kind of book I needed at this time, and it was perfect for me.
And of course, I will follow the entire series, and I hope that each character of team five (and there’s a hint here for you dear author) will have their own story

3 OptimuMM for the Alpha and his human.