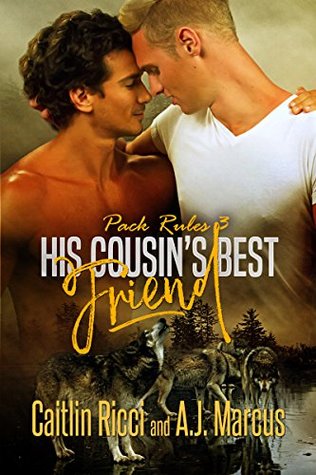 Gabriel isn’t trying to constantly screw up in the Glenwood Springs pack, but it seems like no matter what he does, everything turns out to be his fault. When he lies to his alpha in order to go into town and hook up with a human, things go from bad to worse. Harlow has had enough and sends him off to a nearby pack to join their ranks. He has a cousin there, so he’s not completely alone, but being rejected by two packs in less than six months is a hard blow to his over-inflated ego.

Chris has heard a lot about Gabriel before he even gets to the pack, and none of it is good. While Chris is determined to be respectful because his best friend is Gabriel’s cousin, that’s as far as he’s willing to go, and his patience is quickly wearing thin with each of Gabriel’s crass comments. When Chris has enough and hits his breaking point, it could ruin Gabriel’s chances of ever finding his place in a pack, or it could end up being the push Gabriel needs to learn how to belong. Regardless of what happens, Gabriel’s life is going to change.

His Cousin’s Best Friend is the third book in the Pack Rules series by Caitlin Ricci and A.J. Marcus. I have read the other two books in the series, and I really enjoyed the second book. I thought the first book was kind of rushed and needed to be longer. I also feel that His Cousin’s Best Friend could have benefited from being longer. The first part of the book glossed over the issues that Gabriel has been having in the Glenwood Springs pack. I would have liked more details about what had happened between Gabriel and his cousin and if it ever got resolved. I’m hoping that I like the fourth book in the series more, just like I did with the second book in the series. I can’t wait to see who the next book’s going to be about.

We were first introduced to Gabriel in the first book as the son of Peter, the Alpha of the Frisco pack. He’s a city wolf addicted to his phone and the internet. His father sent him to live with the Woodlands Pack, which later gets changed to the Glenwood Springs pack, in Glenwood Springs, Colorado to put him more in touch with being a country wolf versus the city wolf he is.
We see glimpses of Gabriel in the second book but he isn’t really adjusting very well to being in the new pack, and that, unfortunately, is actually part of the pack’s fault for not wanting to reveal what had happened to the boys in the pack that had been under the old alpha Silvio. Gabriel didn’t understand why all of the other young unmated wolves didn’t want to have anything to do with him or his sexual advances. He just figured they were frigid and it left him feeling frustrated, and he kept getting into trouble because of his unwanted advances. And also because he has a smart mouth. At the end of the second book, he’s on probation with his pack, and Miles, the pack’s omega, is worried about him not fitting in, and he wants to help him.

In the third book, Gabriel’s been sating his unfulfilled lust with humans when he goes to town. He’s been lying to his alpha and telling him that he’s going to the library, but he’s really going to the bar down the street for hookups. However, he ends up getting caught by Miles, who went with him to get more books. Come to find out that having sex with humans is a big no-no and that’s the straw that breaks the camel’s back. He’s sent to live with his Cousin Amanda’s pack. Unfortunately, his cousin hates him and rightly so since he did sleep with her boyfriend when he was in his original pack.

Chris is Amanda’s best friend and also the pack’s omega, but he isn’t your typical shy subservient omega. He has a backbone and is very protective of his pack. And he’s heard all about Gabriel from Amanda and doesn’t want him to be part of his pack and potentially put his pack in danger. A misunderstanding leads to a bad first impression between Chris and Gabriel. They have instant chemistry, but Chris is looking for a mate and Gabriel’s looking for fun.

Can Chris convince Gabriel of the benefits of having a mate or will Gabriel continue to search for fun?