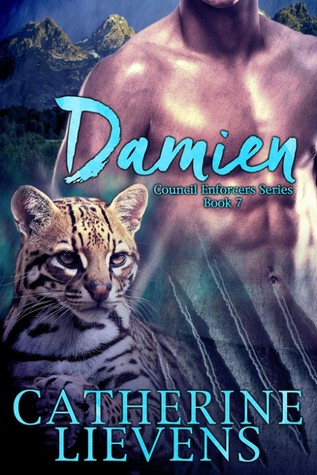 Sometimes you have to admit you were wrong to get the happiness that’s right in front of you.

Damien is an enforcer, and he loves his job. He loves helping people who don’t have anyone else on their side, and he loves his team like a family. There’s something missing in his life, though, and he knows what it is. A lot of his friends are finding their mates, yet he’s still single.

Jake is back in Gillham, hoping to talk some sense into his father. Jake still thinks Sei is too young to be mated with an eighty-six-year-old bear shifter, but his dad doesn’t listen, no matter how many times Jake tries to tell him that.

When Damien and Jake meet, Damien’s age is a problem for Jake from the very beginning. There are only twenty years between them, which isn’t a lot for shifters, but Jake can’t see beyond it and beyond how fragile Damien looks. So he leaves.

Damien accepts a job as a bodyguard in the hope he’ll start forgetting Jake. They’re in the same city, though, and when Jake tentatively reaches out to him, Damien will have to choose whether he wants to give his mate a second chance or not. To complicate things, someone is after Hudson, the man Damien is protecting and who also is a friend of Jake’s family.

Will Damien give Jake another chance? Or will something happen to separate them before they can get over their problems?

Damien’s the seventh book in the Council Enforcers series by Catherine Lievens. I enjoyed this addition to the series. I am always wonderfully surprised at how much detail and depth of character the author manages to get into her novellas. She also does a great job of reminding us about who all of the characters are and the relationships that they have and how they relate to the main characters of the story.

I also enjoy that she uses the main characters name for the title of her books. Since there’s mention of Jake’s father, Donovan, and his mate, Sei, I know it will be easy to see if they have their own story. I found their age difference intriguing and can’t wait to read their story.

This story’s about bear shifter Jake, and ocelot shifter, Damien. Jake’s a marketing consultant who works and lives in DC. Damien’s a council enforcer and lives in Gillham. Jake, being a bear shifter, is tall and muscular. He’s also very stubborn and childish when it comes to the age difference between his father and his father’s new mate. And yeah, I can see how that would be uncomfortable for forty-two-year-old Jake when his eighty-five-year-old dad mates a twenty-nine-year-old. His biggest fear’s that with the age difference that they won’t have anything in common and with Sei’s young age that he will regret mating his father and leave him.

What he doesn’t understand is the mate bond and how strong it is until he finds his own mate while visiting his dad in Gillham and panics and runs back to DC. But neither the mate bond nor his bear side will allow him to stay away for long. And he finally understands how unfair he has been to his father about his mate. When he finds out that his mate is in DC for a job, he knows that he needs to try to fix what he did. But will his new found insight be enough to get his mate to give him another chance?

Damien’s worked hard to be a council enforcer. He doesn’t look like an enforcer. He’s small and delicately built, and he uses that to his advantage. He loves his job, though, and can’t imagine doing anything else. He loves helping people and his fellow co-workers and friends. But most of his co-workers have found their mates, and he can’t wait to find his. He isn’t into casual hookups, and he’s lonely and a little jealous of his friend’s happiness. His friend Lee wants to go out and they end up at a steak house and run into another co-worker and friend Donovan and his son, Jake. They join them for dinner and Damien realizes that Jake’s his mate.

Damien’s excited to find his mate until Jake manages to offend him and tells him that he couldn’t possibly be an enforcer because of the way he looks. Jake also can’t get over the age difference between them which compared to his father’s age gap is nothing. It’s only a measly twenty years which between shifters is nothing. And Damien’s devastated when he finds out from his friends that Jake supposedly had an emergency at work and left the next day to go back home. His friends have the perfect protection detail job for him that just happens to be in DC and involves pretending to be the fake boyfriend to Hudson who is best friends with Jake’s father and has known Jake his whole life. If this job has the added bonus of making his mate jealous, Damien is okay with it.

Damien will just have to decide if he’s willing to give Jake a second chance.

I enjoyed getting to see Jake stop acting like a child and start acting like an adult and putting somebody else before himself. I can’t wait to wait to read Donovan and Sei’s story, and I look forward to the next book in the series.