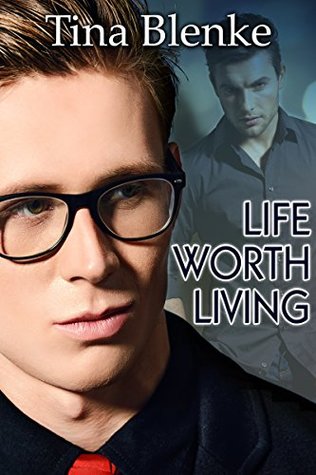 Jake has been in love with Quentin throughout college, studying the sexy science major from afar. Quentin has been in the closet his entire life, keeping his sexuality a secret from his political right-wing family. A summer romance brings the two men together but when Jake is attacked before graduation and then later in his home, the truth about the violence threatens to tear the men apart forever. Only when secrets are finally revealed can Jake and Quentin discover a life worth living.

Set in Duluth, Minnesota, Life Worth Living is the story of Jake Bain and Quentin Tolle who are in their final year of college for their science degrees. The book is written from Jake’s POV, where we learn all about his life, his friends, his thoughts, and his crushes/sexual encounters.

Jake has been smitten with Quentin since they had their first college class together, but since only his best friend Steve knows about his crush, he’s been admiring Quentin from a distance while almost making himself invisible to him at the same time. Quentin is the epitome of tall, dark and handsome, and as far as Jake knows, also straight and unobtainable. When an end of semester get-together at a local bar finally puts Jake and Quentin in the same breathing space, Jake, in the first few words spoken to Quentin, embarrassingly blurts out that he loves him. Then confesses that he’s been sitting behind Quentin in every class they’ve had together for the last four years so as he could stare without being caught. But to Jake’s shock and surprise, Quentin then admits to Jake that he’s gay, and only his best friend Phil knows about it. Quentin’s family are old money and would never accept his sexuality so for now he needs to keep it a secret and stay deep in the closet publicly.

This experience starts a hook-up/friends with benefits relationship between Jake and Quentin. But as time goes on, real feelings and life start to come in to play, and what was meant to be a little bit of fun soon leads to true love. But as with everything in life, you don’t always get what you really want, and even love sometimes isn’t enough for two people to find peace and happiness and stay together.

There were parts of this story that I really liked and other’s that I didn’t care for so much. I liked the plot of the story but wasn’t keen on the time jumps, as I felt it made the story seem rushed. I would also have liked for part of the story to be from Quentin’s POV, just to get an insight into what he was thinking and feeling through it all. The characters I had a love/hate relationship with. Jake came across as quite shy at first because he hid away in the background when he was around Quentin, but then in the next breath, he was saying how he knew how good looking and fabulous he was, and how he could easily pick up a guy if he wanted to. This, to me, came across as being quite irritating, I can’t stand people who love themselves. Quentin, I did like most of the time, his feelings for Jake were genuine, but then when it all went a bit wrong, I was calling him every expletive you can imagine. They did, however, redeem themselves in the end. I did like them as a couple, and the sex between them was HOT! HOT! HOT! The ending was enjoyable and sweet, but I kind of expected there to be more, maybe that’s just my own preference though.

So, if you’re looking for an easy but sweet and sexy read, then I’d definitely recommend this book to you.