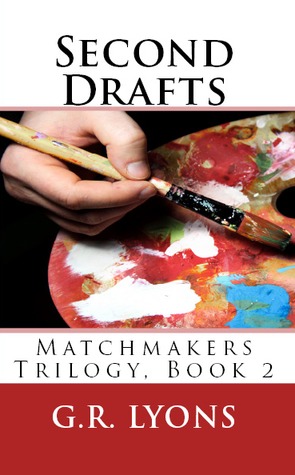 Novelist Shain Ahren is committed to only one thing: himself. Living alone and having an endless string of one-night stands, Shain’s carefully crafted routine ensures no one will ever control him again. But one trick he met at Matchmakers, years ago, he can’t get out of his head.

Painter Elliden Crawford yearns to be controlled. Born with an extreme chemical imbalance, Elliden struggles to keep the fits at bay so he won’t be a danger to others. Only once in his life did Elliden ever truly feel safe, just one night when he met a stranger at Matchmakers.

When Matchmakers brings them together again, Elliden finally gets what he needs, while Shain’s world is thrown into complete disarray. Will Shain ever relinquish control, or will they be fated to remain a discarded first draft?

(Note: This story takes place in a fictional world, the same as the Shifting Isles series. There are multiple gods, different names for the days of the week, etc. A glossary is included with the story for those interested in the little worldbuilding details.)

This is the second book in this wonderful trilogy. These could probably be read as a stand-alone, but I recommend reading Second Chances to know different characters throughout the series. In the first book, we watched the trials and tribulations of Chance and Remy. Chance being much older than Remy. In this installment, we meet Shain and Elliden. Chance and Shain are brothers that have the worst father ever.

Shain is a Dom and only believes in one-night stands with no names exchanged and no sleep overs. He loves a sub who knows how to be a sub. He gets so tired of the wannabe’s out there, but he refuses to have any kind of relationship. That would only complicate his routine and lord knows, we wouldn’t want that. One day while he was out, he saw a painting of himself. He can’t understand how there’s a painting of himself in a gallery but buys it anyway.

Elliden is a troubled man and has been since childhood. His anxiety gets the best of him, and he loses control. He’s caused damage to others and property. His father is a doctor and has created a medicine that helps but knocks him out. He wants nothing more than to be in control of himself and his outbursts. He does talk with a professional and has for years. But the only time he had ever felt that was a few years before when he had a one-night stand with a certain Dom and he was a perfect sub. Did I happen to mention that Elliden also talks to ghosts? It is pretty cool.

Can you tell where this story is going? Well, I’m sure you get the drift, but this story is anything but peaches and cream. There are a lot of struggles and barriers these two need to work through. Shain is a stubborn ass and Elliden can’t seem to keep it together.

Will Shain ever be able let go of his need for such routine? Was it smart of Elliden to move away from his sister into his very own place? Can Shain accept he’s getting feelings for Elliden? Will Elliden ever be able to control his outbursts without his medication? I guess, if you want those answered, you will get this series. You won’t regret it. I couldn’t put it down. I even took it in the bathroom with me, just so I wouldn’t have to stop reading.

This author has really touched on some very serious and sensitive issues. He’s not afraid to approach these issues, and it has really opened my eyes with what others deal with. The MC’s and other characters are very supportive of each other, and there is no denying the love that all these friends, family and lovers have amongst them. Now hurry up and go read.