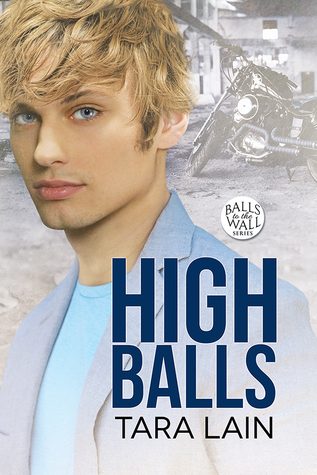 Though only twenty-six, single father Theodore Walters lives with his head in the clouds and his feet firmly planted in reality. At the center of his life is Andy, his seven-year-old son, with whom he shares no DNA, though nobody—including his religious-fanatic in-laws—knows that, and Theodore will do anything to keep them from finding out. Theodore works hard to get his PhD and the tenure and salary that might follow to make a better life for Andy—but the head of his department thinks his dissertation on Jane Austen and romance novels is frivolous.

Theodore’s carefully planned life goes off the rails when he walks into a popular Laguna Beach bar and meets the bartender, “Snake” Erasmo, a pierced and tattooed biker who sends Theodore’s imagination—and libido—soaring. Snake has even more secrets than Theodore and couldn’t be a less “appropriate” match, but he might be the only guy with the skills to show Theodore that happily-ever-after is for real.

High Balls is the fifth book in the Balls to the Walls series by Tara Lain. I have really enjoyed reading the books in this series, but for me, this book wasn’t one of my favorites. I kept feeling like I’d read the book before. I know that the author has re-released some of the books in the series but I did check and this looks like the first time this book has been published. So the only thing I can figure is that I have been reading a lot of ARCs that have the same type of storyline and plot.

The main character who has super religious homophobic relatives that have some hold over the MC which keeps the MC from feeling free to be who he is and have the job, relationship, and family that he wants. Insert the other main character who is completely wrong to fit in with MC 1 and his situation and of course is simply irresistible to MC 1. But MC 2 has so many secrets that you can’t figure out why he is keeping them secret because they would make MC 1’s life so much easier. Throw in a twist that could ruin everything, and all of the secrets come out, and the good guys win over the religious homophobic family members.

So you have Theodore Walters who plays MC 1 and has a seven-year-old son, Andy. Playing the role of super religious homophobic family members are Andy’s grandparents who want to foist their church and their religious friends and their kids on poor Andy who doesn’t want anything to do with them. Playing the part of MC 2 is “Snake” Erasmo or Crystal Streams Erasmo which is his real name. Who we think is a bad boy bartender who has a surprisingly sweet side and a very protective side. I really like how he interacts with Andy and how he tries to protect Teddy as much as Teddy will let him.

Theodore spends all of his time trying to keep his in-laws happy so that they won’t try to take Andy away from him and the only way he can see to do that is to finish his Ph.D. and get tenure at the college that he works at. But the head of his department thinks his dissertation is frivolous. And Theodore sees all of his hard work going down the drain. He needs a pick me up and stops at a local Laguna Beach bar and meets the bartender Snake who sends his libido soaring. But Snake isn’t what he seems because he is so much more than just a bad boy tattooed and pierced biker who just happens to have a heart of gold. But if I told you what all of his secrets were, then it would spoil the surprise, so you’re just going to have to read the book to find out more about Snake. I will say that he is a hottie and has awesome chemistry with Theodore and his interactions with Andy make you want to go awe.

Overall, not a bad book and if everybody else weren’t writing the same type of storyline right now, I probably would have liked it more since I usually love Tara Lain’s books.