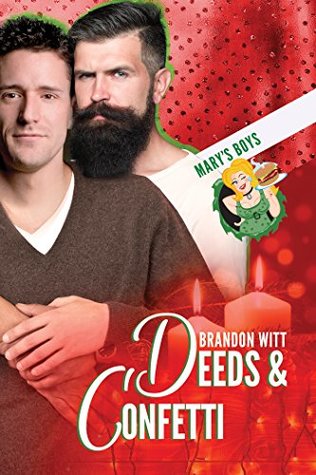 Steven Conley loves the excitement of owning his own Hamburger Mary’s restaurant in Denver, Colorado, and his chosen family of coworkers makes life even better. Steven never regretted leaving the corporate grind behind until his father’s harsh deathbed words leaves him doubting himself.

Ryan Fuller abandoned a lucrative career to start his own party-planning business, but he keeps afloat by coordinating funerals for the local mortuary. When Ryan bumps into Steven—his best friend’s uncle and the man Ryan has secretly crushed on forever—the attraction explodes into a night of passionate abandon for both men.

Steven is blown away by the care and deep connection he feels for the hot young mortician—until Ryan admits who he really is. Reeling from the recent upheaval in his life, Steven must decide whether to give Ryan a chance. To find love, they must risk it all….

Deeds and Confetti is the fourth book in the Mary’s Boys series by Brandon Witt. I really liked the blurb for this book. It checked a lot of my boxes in what I like to read. It has an older/younger best friend’s uncle taboo storyline which I enjoy reading. And they are usually full of forbidden longing and burning chemistry and plenty of internal anguish. And while I got glimpses of some of those things, I think the length of the book kept it from reaching its potential. I read the first sex scene between Steven and Ray, and I thought yes, this is just what I wanted. It was hot and sexy and explosive, and then the rest of the sex scenes were glossed over, and I found that to be disappointing.

I also would have loved some flashbacks about when Ryan was younger and his adolescent attraction to his best friend’s uncle, especially since his best friend’s mom and the rest of his family knew about his crush, except for the uncle of course. I will have to say that I was heartbroken when Ryan confessed to Steven who he was and Steven had no recollection of who he was. It had been a big event in his life, and it didn’t even hit Steven’s radar. Which considering Ryan’s age at the start of his crush is probably a good thing that he was oblivious, but he had to be prompted by his sister to even remember how often Ryan was with his nephew Topher when they would all hang out. I also had a hard time figuring out why Steven had bought Hamburger Mary’s since it didn’t seem to bring him joy. It wasn’t until the latter half of the book that I could see what had drawn him to it in the first place and how happy he was to be a part of it again.

Steven is the proud owner of two Hamburger Mary’s. Unfortunately, they aren’t doing as well as he hoped and he is questioning whether it was smart of him to give up his high finance job and all of the money that he’d made with it. And all of that stress is taking the joy out of why he’d bought them to begin with. Add his father dying is just the icing on the cake. Not that he had any feelings but hate for the bastard, but I did like how he was there for his sister who had a better relationship with him.

Ryan was my favorite out of the two. I thought he was very mature for his age, and I thought it took a lot of guts to confess to who he was when he didn’t have to. He also left behind a lucrative career to open his own event-planning company and supplements his income by coordinating funerals for the local mortuary. When he sees that his best friend’s grandfather died he makes sure to be the attendant at the funeral to be as supportive as possible and with the hope of seeing Steven again. And when he does, the chemistry between them is explosive. But will it be enough to keep them together as they both work through their various issues?

I did like the drag queens and how supportive all of their friends and family were about them being together and having a relationship. This is the first book by Brandon Witt, but I would be willing to give another of his books a try to see if this was just a fluke or if I just don’t mesh with his books.