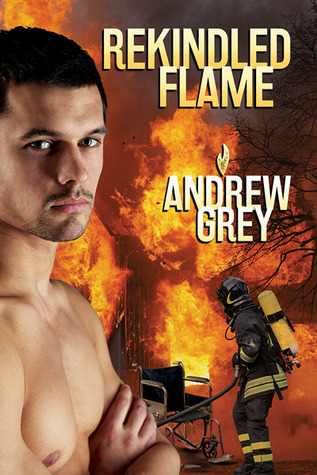 Firefighter Morgan has worked hard to build a home for himself after a nomadic childhood. When Morgan is called to a fire, he finds the family out front, but their tenant still inside. He rescues Richard Smalley, who turns out to be an old friend he hasn’t seen in years and the one person he regretted leaving behind.

Richard has had a hard life. He served in the military, where he lost the use of his legs, and has been struggling to make his way since coming home. Now that he no longer has a place to live, Morgan takes him in, but when someone attempts to set fire to Morgan’s house, they both become suspicious and wonder what’s going on.

Years ago Morgan was gutted when he moved away, leaving Richard behind, so he’s happy to pick things up where they left off. But now that Richard seems to be the target of an arsonist, he may not be the safest person to be around.

Full disclosure, I’m not a big Andrew Grey fan, but I decided to give this book a try because I absolutely love the narrator Michael Pauley.

The story centers around firefighter Morgan and his childhood friend and former marine Richard separated at age thirteen who are then reunited through tragedy. Richard, who is now wheelchair bound, is trapped in a house fire and is rescued by Morgan. Recognizing who they are to each other, the pair then begins the process of forging a future together with Morgan being the more determined of the two to rekindle what they had lost through years of separation.

I found this book to be quite enjoyable, emotional and very sweet. Morgan found a way to constantly lend strength and comfort to Richard who is in a dark place throughout the book. This was indeed emotionally draining, and it isn’t until the very end, where he finds his own strength in fighting off an aggressor that I gave his character any credence.
One of the things I really liked about the book is the author’s willingness to place a disabled character front and center as we are so often bombarded with characters who are nothing short of perfection.

The story bordered on predictable and was slow at times, even the danger that the main character faced didn’t quite have me on the edge of my seat, however the narration was exceptional. His pace followed the story beautifully. The voices were distinct and easy to recognize, surprising the listener even with a quite believable Scottish brogue.

If you’re looking for a slow paced, emotional read with a sprinkle of mystery and a happily ever after romance, then I would highly recommend this book.