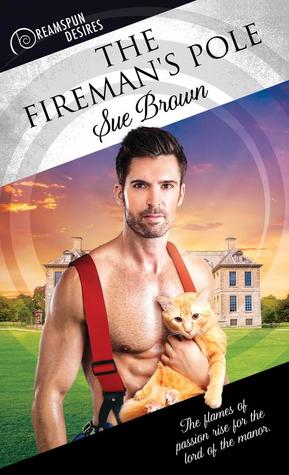 The flames of passion rise for the lord of the manor.

It’s springtime in Calminster village, but things are already heating up. Sexy firefighter Dale Maloney is new to the local station. When Dale backs the company fire engine into the village maypole, he attracts the ire—and attention—of Benedict Raleigh, the Baron Calminster.

Soon after meeting Dale, Ben breaks off his relationship with his girlfriend, and the sparks between Ben and Dale are quickly fanned into flames.

Unfortunately the passion between the two men isn’t the only blaze in the village. An arsonist’s crimes are escalating, and it’s up to Dale and his crew to stop them. Meanwhile, as they investigate, an unscrupulous business partner attempts to coerce Ben into marrying his daughter. The May Day parade is around the corner, but they have plenty of fires to put out before Ben can finally slide down the fireman’s pole.

The Fireman’s Pole is set in the fictional village of Calminster in the English countryside. It’s an enjoyable feel-good little romance with a bit of dramatic excitement to keep you hooked.

Dale Maloney has recently moved to the village for a fresh start. He left his previous station just outside of Nottingham when his ex-partner, Baz, cheated on him with a female firefighter that they both worked with. Dale and Baz were in the closet at the station, so no one knew that they were in a relationship together, and after the betrayal by Baz, Dale couldn’t stay there any longer. Now, Dale has vowed that he won’t hide who he is from the people he works with anymore. So when he arrives at the Calminster village fire station, the first thing he does is tell the other members of the crew that he’s gay, and Dale is over-the-moon to find that everyone is absolutely fine with it.

Benedict Raleigh, or Ben to everyone who knows him, is the nineteenth Baron Calminster of Calminster Hall. When Ben’s parents died, Ben took over the running of the family’s businesses, the estate and village. For the last nine months, Ben has been dating Sabrina, who’s the daughter of one of his business partners. Ben knows he’s expected to marry Sabrina, but Ben isn’t attracted to Sabrina in that way. In all of the time that they’ve been dating, their relationship has never been physical, and Ben can’t seem to bring himself to take that next step either. Ben knows he’s attracted to men, but also knows he’s supposed to marry a woman and produce an heir for Calminster Hall. So Ben is resigned to the fact that even though it’s not what he wants, his life has basically been mapped out for him because none of the villagers or his business associates would accept him being gay or living with a man.

When a fire breaks out at the home of Mrs Wilson, who’s been Ben’s family’s cook since he was a child, Dale and the rest of the crew race to the scene, where Mrs Wilson is found outside in the garden, unconscious. When Ben arrives and tries to cross the cordon to get to Mrs Wilson, he instantly clashes with Dale and gets on the fireman’s wrong side. Dale doesn’t know who Ben actually is, he’s heard about the lord of the manor but hasn’t managed to see him yet, until he finds himself having an argument with the man who owns the village. Dale was expecting an older, rotund man wearing tweed, not someone good looking and around the same age he is. The next day, when the firefighters go to the village green to do the inspection for the upcoming parade, Dale is driving the fire engine when he needs to move to let another vehicle pass, one of the crew tells him to reverse onto the grass but doesn’t warn him he’s heading straight for the village maypole, until he hears the crash. When he gets out of the vehicle the maypole is lying flat on the ground, the fire engine has a slight bit of damage and heading straight towards him with steam practically coming from his ears is Ben. Dale does everything he can to apologise for what had happened, but Ben is furious and won’t hear it until Dale offers to fix the pole in time for the May Day parade. Dale and Ben somehow manage to keep causing each other irritation, but at the same time they both find each other really attractive, and even through the disharmony, they can’t help but sneak little looks at each other in admiration.

Ben and Dale finally sort out their differences, and soon become very friendly with each other, which surprises everyone in the village. But a few people start to notice that it’s more than just friendship between them, and as much as they try to deny it, their actions speak louder than words. To Ben’s amazement, the people who he’s closest to are really supportive of him being with another man, and it makes him believe that he can be happy without having to hide who he is to everyone.

This book was a lovely little change from the norm. The relationship between Dale and Ben was a slow-burner, they waited a long time to get to the sexual part of their relationship, and it was nice to see that two people can get to know each other and enjoy spending time together without jumping into bed the first chance they get. I think that the wait for the first sexual encounter definitely added to the enjoyment when it actually happened and made the whole thing seem very authentic and natural. I really liked how the story was written, the plot and the setting. But I do have one slight criticism, and that’s the ending. I felt that the story ended too suddenly and would have maybe benefited from an extra chapter or epilogue to tie everything up. Apart from that, it was a brilliant book to read, and I’m so glad that I had the opportunity.

2 thoughts on “Review: “The Fireman’s Pole” by Sue Brown”