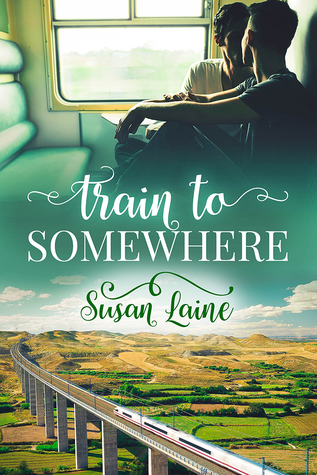 It was only a game. Wasn’t it?

At a party one night, Charlie Dean’s childhood friend Will Tucker accepts a dare and dresses up as a girl: clothes, hair, makeup. Seeing Will that way incites a riot of confused emotions in Charlie—and he responds by lashing out. He never meant to hurt Will, and now he must do some serious damage control.

During a school trip by train, Charlie and Will share a sleeper cabin. Charlie intends to mend fences, while Will figures it’s as good a time as any to broach the subjects of attraction and sexuality. They want to get their relationship back on track. But after the secrets they both reveal, their friendship can never be the same.

Train to Somewhere is the third book in the Before… and After series but each book is a standalone story.

I loved reading Kissing Lessons, which is the second book in the series and I was hoping that I would love Train to Somewhere just as much. But alas, I had mixed feelings while reading Train to Somewhere and I wasn’t sure if I wanted to continue to read it after what Charlie did to his best friend Will. What do you ask did Charlie do to Will? Well according to the blurb after seeing Will dressed up as a girl, complete with clothes, stockings, hair, and makeup, Charlie has some confused emotions (i.e., he popped a boner) for his best friend and he responds by lashing out. I’m not sure if I would have described it as lashing out when Charlie rips the clothes from his body including his stockings all while Will is pleading with him to stop and then forces him into the shower in his underwear to scrub the makeup and hair gel off of him. I would have considered it abuse and assault, and I was sickened that Charlie would do that to his best friend. And when Charlie finally realizes what he’s done, he is sickened and terribly confused and ends up on a bridge contemplating suicide for what he did to Will and the loss of his friendship. He’s sure that he has lost his best friend and he knows that he only has himself to blame.

But Will comes looking for him and makes him confess to what had happened and what he had been thinking and feeling before forgiving him. A week after the party, they go on a school trip that has been a year in the planning. Will and Charlie, while trying to get their friendship back to what it was, will explore their new feelings and try to figure out their sexuality and through it all, Will reassures Charlie that they will always be best friends and he will never leave him. They both love each other but just as best friends at that point in their lives. They are only eighteen, and they don’t have romantic feelings toward each other.

I liked the epilogue that was ten years after the train ride and how they had kept in touch through the years and were finally ready to be more and finally secure in who they were. I really liked the ending of the book, but I now want to know how their relationship pans out.

Overall, I thought the second half of the book redeemed the first half, but I can’t help but wonder how Charlie would have turned out if Will hadn’t taken Charlie’s first violent reaction well and helped him redirect and process his feelings to be positive instead of negative. Would he have turned out to be a closeted gay that beat up guys that he desired because he couldn’t process his feelings and was adamant that he was straight?

So I’m glad that Will was such a good friend and gave Charlie the unconditional support that he needed and that his life went down a different path.