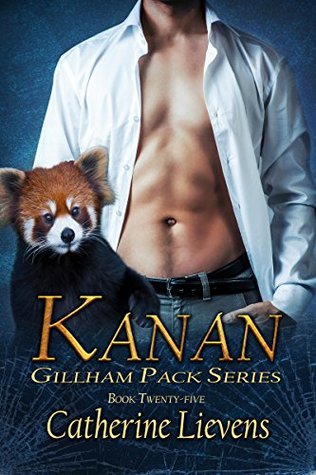 Since he was rescued from the lab he’d been locked up in, Kanan hasn’t been living—he’s been surviving. He can’t trust anyone, not completely, and it’s easier to hide away in his room, away from life.

Titus lost everything—his father, his tribe, his best friend. He knows Jarah and Neriah did the right thing, taking the tribe away from him, but it doesn’t make accepting that any easier. Yet when Jarah asks him for help, he decides he’ll do what he has to do to keep his best friend and the pack where some of his old tribe members live safe, even if that includes killing the Los Angeles pack’s alpha.

Kanan never expected to meet his mate, not when he spends so much of his time in his room. But when he meets Titus in the woods, he knows he can’t hide away from their bond—and he doesn’t want to. Will he manage to get through the anger Titus has shrouded himself in? And will Titus find a way to break the thick walls Kanan built around his heart?

Kanan is the twenty-fifth book in the Gillham Pack series by Catherine Lievens, and according to the dedication in the book, it’s the final book in the series. I was kind of sad to read that this was the final book because I have truly enjoyed reading this series. Now I will just have to focus on her other series which I enjoy reading also. Like all of Catherine Lievens’ books that I have read so far, Kanan was well written and nicely edited. The characters were lovable, and I enjoyed getting to see the other members of the Gillham Pack.

Kanan is one of the shifters rescued from the labs. He’s had a hard life so far. He’s had his entire family killed before his eyes. Then he was captured, tortured, caged, and experimented on by human scientists. He has lots of physical and mental scars. He’s now part of the Gillham Pack and has been for a while but he spends most of his time in his room, and he’s only made a couple of friends. Among his friends is Nuallan, a Nix, and he lives with Kameron and his mate Zach at the Alpha’s home. Kanan is a big introvert and antisocial, and so is Nuallan, which is why they get along as friends. Kanan has been with the Gillham Pack long enough to know who Titus is but he’s never met him in person until he comes across him while on a walk in the woods. Then he realizes that Titus is his mate. But he doesn’t know what to make of his mate when he runs away from him.

Titus has lost everything. He’d lost his father, his tribe, and his best friend, Jarah. Titus has lots of issues and is stuck in the mindset that he needs to make his deceased father proud and be the leader that his father wanted him to be. Even if it wasn’t something that Titus himself desired or was good at, which is why his best friend took away his leadership of the tribe and disbanded it. With that goal in mind, he’s prepared to marry a former female tribe member to produce kids and rebuild the tribe. And he believes that he’s willing to forgo his mate when he meets him in the woods. But the pull of the mate bond is strong, and when his mate comes for him, he finds that he can’t deny him. And he will do anything to make him happy and keep him safe, even if it means killing the people that are endangering the Gillham Pack.

I really enjoyed Kanan and Titus’ interactions and how Kanan was determined to get his mate whether his mate wanted a mate or not. I am going to miss the Gillham Pack and its members, but I loved the way the author has finished out the series.

I can’t wait to see what new series she comes up with next.