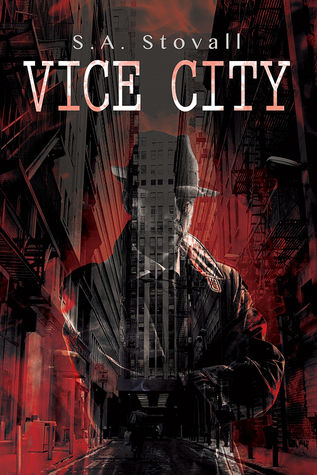 After twenty years as an enforcer for the Vice family mob, Nicholas Pierce shouldn’t bat an eye at seeing a guy get worked over and tossed in the river. But there’s something about the suspected police mole, Miles, that has Pierce second-guessing himself. The kid is just trying to look out for his brother any way he knows how, and the altruistic motive sparks an uncharacteristic act of mercy that involves Pierce taking Miles under his wing.

Miles wants to repay Pierce for saving his life. Pierce shouldn’t see him as anything but a convenient hookup… and he sure as hell shouldn’t get involved in Miles’s doomed quest to get his brother out of a rival street gang. He shouldn’t do a lot of things, but life on the streets isn’t about following the rules. Besides, he’s sick of being abused by the Vice family, especially Mr. Vice and his power-hungry goon of a son, who treats his underlings like playthings.
So Pierce does the absolute last thing he should do if he wants to keep breathing—he leaves the Vice family in the middle of a turf war.

Pierce is the head enforcer of the Vice Family, a mafia family who controls Noimore city.
One day, he was supposed to “take care” of a young man, Miles, who is a suspected mole.
Without knowing why himself, Pierce decides to spare Miles’s life and takes him under his wing.
Miles has one goal, find his brother Jayden and move out of town. When Pierce saves his life and helps him to find and save his brother, Miles’ priorities change, and Pierce wellbeing starts to be his top list.

Between the turf war with the Cobra, finding Jayden and staying alive, Miles and Pierce have to fight in order to one day leave the town and maybe have a future…together
Ok, so there’re the books that I love and the books that I loooove. This one is the book that I Adooooooooooooooooooore. It’s the BEST NOIR BOOK 2017.
Where I start? I don’t know how to explain my feelings.

The characters are awesome.

If Miles is strong, sweet and sometimes naïve: he’s also loyal and devoted to Jayden and Pierce.
Pierce is SUBLIME. This man is rough, hard, brutal, and violent. He’s merciless, smokes, drinks, fucks and doesn’t give a shit about what people say or think. He’s gay, out and proud. But he’s also loyal, with a code of honor (maybe not the same as ours but still he has a code). He’s also tired. Tired of his dog life, tired seeing the same low life, the same shit, the same dark and painful side of the human race for the last 20 years. He is absolutely sublime when he comes to Miles, taking care of him in his own weird way.

The plot and the story are awesome, and the writing is brilliant. It’s what? The fourth book from the author and she wrote this masterpiece. Hats off to the artist!!
This book is dark, really dark, don’t expect unicorns and rainbows here, nope, we have whores, junkies and murderers. It’s written with Pierce’s pov only, and that’s probably what I loved the most in this book. The entire book we’re in his head, how he lives, how he meets Miles, how their connection start.
It was so brilliantly written, well built, it was dark and poetic, rough and tender, all at the same time.

She realized the incredible thing; to put love in this book, without naming it once, without expressing it once. In the tortured soul of Pierce and Miles, their fucked-up way of being together, there was more love than any “I love you.” (That doesn’t mean that I don’t want to read Pierce and Miles saying those words, Dear New favorite author of my life!).
It reminds me the movie, Sin City, this book is a chef-d’oeuvre just like this movie.

So if, like me, you’re a huge fan of Noir fiction, polar movie, and Gay Love… This book is THE book for you. You can’t finish 2017 without meeting Pierce (My Hubby btw) and Miles.
At the end of the book I was sitting on my couch at 4 am in the morning (2h before I have to go to work…yep zombie face all day), looking in the void trying to understand what’s happened to me, how I can go on with my life after this book. How I will live without my boys and most importantly, WHEN IS BOOK 2 COMING??

Now, if you’ll excuse me, I have to go back sit down on my couch and find the strength to fight this book hangover or maybe re-read it. I hope book 2 will come soon, like tomorrow, because I need to read more about Pierce and Miles, the end of this book was sweet, but not enough, they have to live so much more (like a fucking beautiful crazy love story and a revenge to do). So Dear New Author of my life, please, hurry up!!!