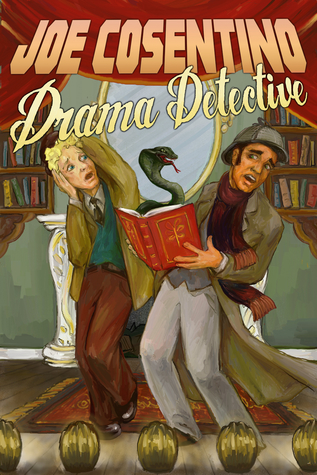 Theater professor Nicky Abbondanza is directing a Sherlock Holmes musical in a professional summer stock production at Treemeadow College, co-starring his husband and theatre professor colleague Noah Oliver as Dr. John Watson. When cast members begin toppling over like hammy actors at a curtain call, Nicky dons Holmes’ persona on stage and off. Once again Nicky and Noah will need to use their drama skills to figure out who is lowering the street lamps on the actors before the handsome couple get half-baked on Baker Street. You will be applauding and shouting Bravo for Joe Cosentino’s fast-paced, side-splittingly funny, edge-of-your-seat entertaining fifth novel in this delightful series. Curtain up, the game is afoot!

How has it even possible that I don’t know this author? HOW!!!!!

This book was a super fun read, and I enjoyed everything.
Nicky and Noah work together for their next musical comedy “Is Holmes a Homo?” when a series of crimes are committed among the cast. Nicky and Noah have two tasks, finish the rehearsals for the big opening and find the murderer.

It was my first book by Joe Cosentino (and not my last you can be sure of it), and I didn’t know what to expect.
It was a beautiful surprise to read this show. Because that’s what it was, a show not a story. The book is built like a show on Broadway, it wasn’t written like it (you know like in the theatre “Act I … Scene I” blah blah blah) but the way the plot unfolded, it was like watching a show on stage.

I loved how the author put us, the reader, with the casting, because we are members of the cast. The book is written with Nicky’s POV but it wasn’t a pure narration style, there were interactions between Nicky as the narrator and us the reader, all the time. I loved it, it was full of fun pun, sassy remarks with some reference with the actuality in a funny way, I loved it!!!!

For me, it was a mix between the pure French style of the “Théatre de Boulevard” with scenes as funny as in some play of Molière and between an Agatha Christie’s book like Ten Littles Niggers or Murder on the Orient Express. And for your information, I would have been a very bad Detective, because each time I suspected someone, it wasn’t him because they ended up dead (No, I did not bring them bad luck, I was too busy enjoying Nicky sassy comment that’s all !!!).