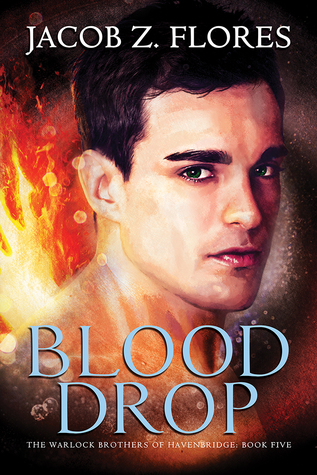 A single drop of blood might hold the key to the fate of the magical world, and Aiden Teine must choose between his bond of love and embracing the power to defeat his enemies.
Aiden’s adjustment to being the first vampyre fae hasn’t been easy, but his ties to warlock Thad Blackmoor prevent him from becoming a monster. With Thad, Aiden has a new family, a new purpose, and a new reason to live—though he’s technically undead. There’s one problem: Aiden’s control over his vampyre is weakening. He must learn what’s triggering his violent reactions before he surrenders to the creature within. To complicate matters, Aiden discovers his transformation might not be complete, and he fears what he will become.

Aiden’s search for answers thrusts him into a frightening world filled with deception, new dangers, and apocalyptic visions. The part destiny intends Aiden to play could alter his relationship with Thad forever. If Aiden, Thad, and the entire magical community are to survive Icarian’s latest scheme, Aiden must interpret the meaning of the prophetic blood drop before it falls and ushers in the destruction of all creation—and the warlock he loves.

This is the fifth book of the series and the first time I have read this author. Even though I have not read the first four, which I strongly suggest you do, it was a very good fantasy book. I felt lost and had to keep going through the beginning of the book because there is a list and descriptions of all the characters. I did find the list helpful. I am excited to read the series from the beginning and to see this world or worlds from the beginning.

Aiden is a fire fae and former prince of his world. Then Aiden got turned into the first vampire fae and was cast out of his world. Aiden struggles with his new vampire being and is trying not to give into the desires of that first drink.

Thad is Aiden’s boyfriend and true love. Thad is an ice warlock and does a really awesome job keeping Aiden at bay with his thirst. But will it be enough? Thad has to help everyone realize they can’t be discovered by the human race or they will all be hunted.

There are so many characters that make this book enjoyable yet confusing because I have not read the other books. Will there be a happy ending for Aiden and Thad? Will Aiden give in to his thirst and alter the magical community? How will his love for his warlock affect his decisions? These are the answers I enjoyed reading, and I hope you do too.