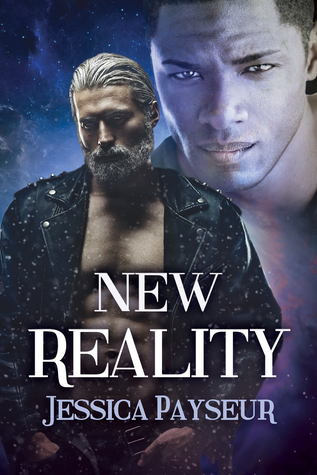 It’s lonely running a small transport ship across the galaxy when you’re as old and as single as Connell Smyth. So when the dreams start up, Connell assumes they’re his mind’s way of working through what his life has become—until he discovers the man in his dreams might be much more than a figment of his neglected imagination. Connell can’t quite believe it could be real, but he can’t help becoming obsessed with this new lover on an unknown luscious planet.

Seventeen years ago, Wystan Kreeger’s survey mission crash-landed on a hard-to-reach planet. Sole survivor Wystan turns desperate after his computer, the only companion he’s had since, gives out. Even in the improbable event that the man in his dreams is real, he’ll face the same risk from the planet’s storm-charged atmosphere if he tries to track Wystan down, and he could end up just like Wystan’s former crew. But finding each other across so many light-years can’t be a mere coincidence. Now they must find a way to realize the happiness they’ve found in sleep during the light of the day.

This is a new author to me, and I liked the storyline of the book. But I think New Reality by Jessica Payseur was hampered by how short it was. As far as I can tell it’s a standalone book, but it feels like the start of series or a prequel to the start of a series. I liked the characters, but they needed more development and backstory. And the book ends just when I was starting to enjoy them as a couple. And as a personal preference, I wish the dream parts of the book were in italics, it would have made it easier to see when Connell was dreaming. I did enjoy the sex scenes in the book.

It just needed more details. There wasn’t a lot of world building in the book. The fun part of writing a science fiction book is to make the different places unique. And after finding Wystan (the man he has been dreaming about), they do travel to different places to deliver the remains of the rest of the stranded crew to their loved ones, but there weren’t any details about the places. I missed the details, and I think the book would have benefited having dual POV instead of just told through Connell’s POV. I did like that the characters are in their late 40’s and early 50’s.

The story starts out with Connell trying to cope with runny his small transport ship all on his own since his partner/lover of a couple of decades, Jason, passed away from a heart attack three months earlier. However, Connell is quick to realize that he should have paid more attention to how Jason handled getting and selling their cargo. Connell was great at finding the customers, but Jason was the one to chat them up and seal the deal and get the best price. Lucky for him their ship has an advanced computer to run the ship and Connell spends a lot of time sleeping.

First trying to connect with Jason and then later he starts dreaming about a mysterious new person. He isn’t sure if it is just a figment of his imagination or if the new person who calls himself Wystan is real. So he tries to investigate with the help of his onboard computer to find Wystan and the planet that he is on based on the clues that he’s gleaned from the dreams.

Wystan’s survey mission crash-landed on a hard to reach planet, and unfortunately the company they worked for never sent a rescue ship. He’s survived on the planet for seventeen years mostly by himself with only his computer to keep him company. Until that also dies and he’s all alone. With nothing to occupy him, he starts to dream of a man. But is the man real or just a figment of his imagination? And if he is real, will he be able to rescue him without his ship crashing also?

Overall, not a bad story just not long enough for me to satisfy my curiosity about the places and things that they got to see and go.