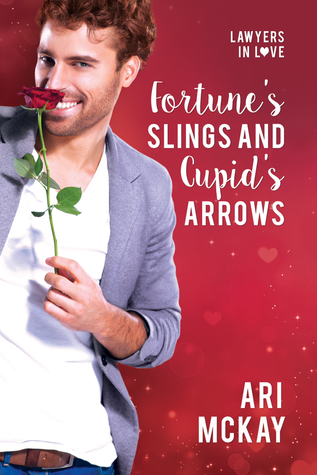 Successful attorneys Dane Coulter and Cal Monroe are rivals in the courtroom and friends behind the scenes. But can they be more?
Cal’s always carried a torch for Dane, but Dane is so deep in the closet, he can’t even admit that he might be gay. His father, a raging homophobe who rules the family with an iron fist, forces Dane into an engagement—to a woman. Dane goes along with it to keep the peace and protect his mother, but for Cal, it’s the last straw.
He can’t let Dane make a mistake that could ruin the rest of his life, and he only knows one surefire way to make Dane admit what’s in his heart. But confessing his feelings to his friend could backfire, driving a wedge between them. And even then, the choice must be Dane’s—to live the life his father wants, or to give up everything he has for a chance at happiness in Cal’s arms.
Second Edition
First Edition published by Torquere Press, February 2013.
.

Fortune’s Slings and Cupid’s Arrows is the second book in the Lawyers in Love series by Ari McKay. I absolutely loved the first book in the series, Santa’s Naughty Helper, and I wasn’t disappointed by this story either. The stories in the series are short at only 82 pages, but that’s fine with me. They aren’t super in-depth stories either, but sometimes I prefer a nice lighthearted read in between more complex reads. I find Ari McKay’s books are just what I need when I want an enjoyable book with lovely characters and a plot/storyline that I don’t have to strain my brain to figure out who is doing what and why. The stories are short but sweet with just enough angst and hot sex scenes.

I was first introduced to Cal and his best friend Dane in Santa’s Naughty Helper and I was hoping that the next book was going to be about Cal and so it was. Cal Monroe is the senior partner of Caldwell and Monroe, and Dane Coulter is the only son of his biggest rival, Randolph Coulter of Coulter and Coulter. Randolph Coulter has been ruling his son’s life for over 32 years, and Dane has long since given up on trying to oppose his iron-willed homophobic verbally abusive personality. The only thing he has ever stood up to his father about is his friendship with Cal.

Cal, on the other hand, has had the biggest crush on his best friend since they first met while defending their clients during a court case. But Cal never pursued his attraction to his friend because he could tell that Dane needed a friend more than he needed a boyfriend. And he knows that with his home life as it is that he is very much stuck in the closet. But when he sees an engagement announcement in the Sunday paper about his best friend getting married to a women, he knows that it’s time to come clean about his feelings for Dane. And let him know that he has other options and that it’s time to stand up to his father for who he is and what he wants.

I loved Dane’s fiancé and how even though their marriage is pretty much a marriage of convenience she isn’t willing to have a marriage where his father will be a part of it. She is strong and helps bolster Dane’s courage to stand up to his father. I also loved Dane’s mother. She could have come off as a very weak and downtrodden character, but she would do anything for her children’s happiness, and all she wanted for Dane was his happiness regardless of his sexuality. And well, I hated Dane’s father, but I was supposed to so the author did a great job with his character depiction also. Overall, a great story and I can’t wait for the next book in the series to come out.