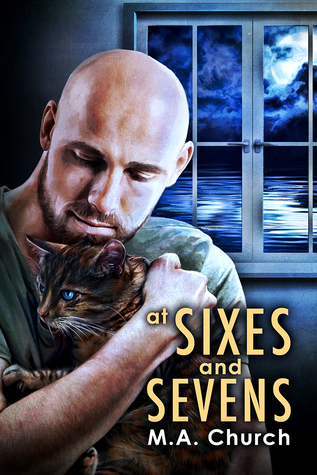 Werecats mating with humans was bad enough…. But an Alpha werewolf?
Aidric’s life takes an unexpected turn when he meets Alpha Carter Lovelock of the Dark Lake Pack—who is apparently his mate. Now Aidric must decide whether to accept the mate the goddess chose, or deny her gift because cats and dogs just don’t mix.

Carter is in a pickle. He always assumed his mate would be a female werewolf. How else is Carter supposed to carry on his line and retain Alphaship? When Aidric comes into his life, Carter’s ex, Sabrina, isn’t giving up easily. Her brother, Delaney, is a thorn in Carter’s side, and some of the other werewolves go out of their way to make Aidric feel unwelcome, including one of his deltas, Evan.

Unfortunately, what little headway they make is destroyed during a full moon hunt when enemy werewolves attack Aidric and threaten the pack house where the Dark Lake pups are kept—an ambush that could have devastating consequences on their future.
Werewolves are notoriously insular, and before Carter and Aidric can build the life they want with each other, they’ll face a fight for acceptance.

Aidric is a werecat, beta of his clowder and happy in his life, until he met Carter.

Carter is a werewolf, Alpha of his pack, and wants to meet his fated mate, to have pups and be happy, until he met Aidric.
Aidric and Carter are fated mates. A werecat and a werewolf. An alpha and a beta. They’ll have to accept it, and more important, to be sure that the pack accepts Aidric. How? It something they need to figure out.

I really liked the book. Even if the book can be read as a standalone, it’s better to read the previous books since there’re a lot of references in this one.
Aidric is a solitary werecat, happy in his cabin, proud of his place as a beta, and a bossy bottom (I loved it !!!). He wasn’t ready to have a mate, and worse, a werewolf. But even if it scared him, he tries. I love this about him, he didn’t back up (not entirely), and he really tries to overcome his fears.

Carter is a powerful Alpha, he’s strong, fearless, loyal and fair. He’s also deep down, a caring man with a huge heart. His pack and family came first, and He’s ready to do everything for his mate Aidric.

It was a really good story, with an interesting plot, and characters well developed.

Even, if they were mates, it wasn’t the insta-love between them, it grew slowly (ok not that slowly they are shapeshifters after all!!).

It was well written, and the parts where Aidric shifted into his cat form is really funny.
I look forward for book 5, but before I read those, I’ll read the previous books.

4 OptimuMM for the Wolf and his pretty kitten.

One thought on “Review: “At Sixes and Sevens” by M.A. Church”