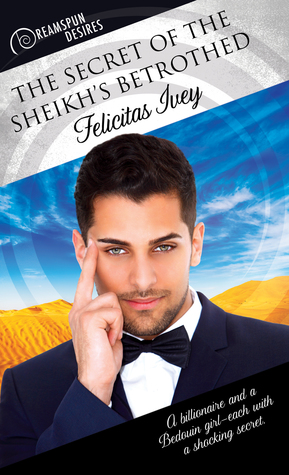 A billionaire and a Bedouin girl—each with a shocking secret.
Billionaire Fathi al-Murzim is a workaholic businessman, too busy running the family’s companies to even think about marriage. Too bad he never told his grandfather he’s gay, because Grandfather just announced a childhood betrothal—to a Bedouin girl Fathi never heard about before.
Ikraam din Abdel was raised as a woman by his avaricious and abusive older sister, who didn’t want him to be their father’s heir. He’d never thought to be married either, and is surprised when his sister informs him of his betrothal.
When Fathi and Ikraam meet, they are drawn to each other in a manner neither of them expected. As the plans for their wedding progress, they both realize they need to tell the other the truth. But can they, with both cultural taboos and family pressures to deal with?

The Secret of the Sheikh’s Betrothed by Felicitas Ivey is the forty-sixth book in the Dreamspun Desires Series. This is my first book by Felicitas Ivey, and I have to say that I very much enjoyed reading it. I also can’t wait to read more books by Felicitas Ivey. This book had secrets, action, drama, verbal and physical abuse from an older sibling that forced her sibling to dress and act like a woman so that there wouldn’t be a male heir to take over the Bedouin tribe. I adored the whole story, and I was intrigued until the end. I just couldn’t put it down. Which for me is surprising because I have found from reading other Dreamspun Desire books that they are a little on the tame side for me. A little too sweet and not enough passion to balance it out. But I didn’t have that problem with this book.

I absolutely loved both Fathi and Ikraam. I loved when they first met and how confused Fathi was to find that he desired a female for the first time or so he thought. It really had him questioning his sexuality since he was gay and had never been attracted to a girl before. Ikraam played the perfect Bedouin girl, and he had been forced to play the role for his whole life, so he was actually more comfortable being completely covered as a proper Bedouin then not being covered when with his betrothed even after Fathi found out that Ikraam was a male instead of a female. Which works out perfectly for Fathi since he needs to get married to a female in appearance but wants a male in his bed. This also works for Ikraam who never thought to find somebody that would accept him for who he is and still want to marry him. But for everything to work out perfectly Fathi’s grandfather will have to outwit and outplay Ikraam’s abusive and manipulative older sister and rescue Ikraam’s underage cousin from an abusive male that she is betrothed to. But you just know that Grandfather is up for the challenge.