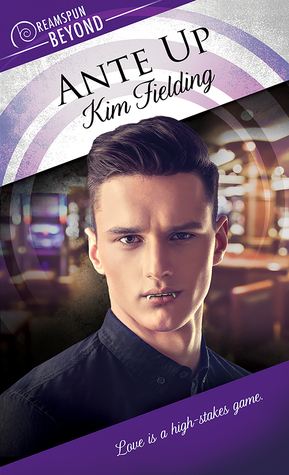 A century and a half ago, Ante Novak died on a Croatian battlefield—and rose three days later as a vampire. Now he haunts Las Vegas, stealing blood and money from drunken gamblers and staying on the fringe of the powerful vampire organization known as the Shadows. His existence feels empty and meaningless until he meets beautiful Peter Gehrardi, who can influence others with his thoughts.
An attraction flares instantly, bringing a semblance of life to Ante’s dead heart. But the Shadows want Peter too, and they’re willing to kill to get him. As Ante and Peter flee, they learn more about themselves and each other, and they discover that the world is a stranger place than either of them imagined. With enemies at their heels and old mistakes coming back to exact a price, how can Ante and Peter find sanctuary?

Ante is a vampire living in Las Vegas. He’s solitary, and survives by seducing drunken men before stealing and feeding from them (but not killing).

Peter is a charming man. He’s young, blunt and seems to have the capacity to read people.
When Ante and Peter met, it was lust at first sight, a passionate attraction between them. But when the Shadow, a powerful vampire organisation, wants Peter, Ante has no choice but to go to war against them for Peter’s life.
It was a pleasurable book.

Ante is old, like super old, and he’s kind of blasé by life. He’s solitary and refuses to “hang out” with others vampires or any others species. Peter is naïve, smart and kind. Without knowing it, he awakes Ante (no pun intended), he brings something to Ante, that this Vampire had never expected. Hope, Goals, love.

I liked these guys, they’re adorable and sweet. Their love story is easy and simple to follow, no angst, no personal drama (except a horde of Vampires who wants to kidnap Peter and kill Ante). Their interactions are funny and more than once, I smiled at their banter.

The writing was good. The book is written from Ante’s POV, and easy to follow. The plot is well built, the storyline and the events are coherent.
I recommend this book, if you want to read a simple, sweet love story with action and fun.

4 OptimuMM for this gay supernatural version of Bonny and Clyde.