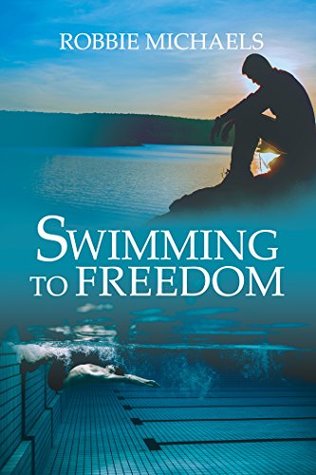 Once, swimming was a labor of love for Brandon. Now it’s just a labor.
When Brandon’s competitive, domineering father decided to cash in on his son’s hobby, he sucked all the joy out of the sport for his son. Now Brandon’s father spends every ounce of his energy training Brandon for one purpose: Olympic gold and with it the chance to experience success vicariously through Brandon.
Brandon falling in love with Tyler, another swimmer, was not part of his father’s plan. Luckily the two young men have Joel in their corner, a straight ally who helps them find time alone. When Brandon’s father finds out about the relationship, his reaction is sadly predictable, and soon, Brandon’s new home is beneath a bridge. He finds peace swimming in the river, but feels fear as wild animals pass by his shelter during the night.
But once again, his happiness cannot last. Torrential storms are threatening to wash away his future—maybe for good this time.

Swimming to Freedom was not the book I expected from reading the blurb. I thought it would be an intense and emotional read, but I didn’t get that reaction at all. There were characters and things that I did like, but this book I just found really hard to connect with.

Brandon is seventeen years old and lives with his father who’s extremely controlling and overbearing. He has no life of his own as his father dictates his every movement, and needs to know what Brandon is doing and where he is at any given moment in time. Brandon’s life is the pool for training, school and home. Even the pool which used to be his sanctuary and escape has been taken over by his father, who goes to every training session and stands on the edge of the pool and shouts commands and instructions. The only friends he has are through the swimming team, but his father doesn’t allow him to spend time with them outside of training. Joel is the person Brandon is closest to on the team, and they only see each other more often because they live close to each other and Joel sometimes gives Brandon a ride to training because his father won’t let him get his driver’s permit to learn to drive. When Joel and Brandon are chatting as they’re driving home one day, Joel guesses that Brandon is gay, and he decides he wants to help Brandon accept his sexuality and find a boyfriend. Joel knows that it needs to be kept secret from everyone else on the team just in case Brandon’s dad hears about it.

At one of the swimming competitions the team are involved in, Brandon meets Tyler who’s on a rival team. The two boys hit it off straight away, and Tyler flirts with Brandon and asks him to go out for something to eat afterwards. With a little white lie to his father about the reason for going, Brandon finally gets a chance to do something for himself. With the help of Joel, Brandon and Tyler then begin to spend more time together, where their relationship develops. But of course, Brandon’s dad notices that things are different and doesn’t like that he’s spending so much time hanging around with Tyler. So when Brandon comes out and tells him he’s gay, his father is completely against it and isn’t willing to try and listen to what Brandon is saying or how he’s feeling, which leads to Brandon leaving home and his father telling him he’ll never be welcome back.

Brandon stays with Tyler for a while, but a morning rush when Tyler’s family are going out of town causes a mix up with some keys, and Brandon is left with nowhere to stay and no one to turn to. Brandon is left completely homeless and penniless with only the clothes he’s wearing.

I can honestly say that Joel was my favourite character and the saviour of this story and book. If it wasn’t for him, I would have probably stopped reading before the end. He’s the most amazing person and friend that anyone could want around them. He was kind, supportive and willing to do whatever it took to make sure Brandon was happy and didn’t feel like he was alone. Brandon’s father, however, had my blood pressure going off the charts. I don’t think there’s ever been a character I’ve hated so much in any book I’ve read. The man was absolutely horrid.

There was one thing that annoyed me more than anything about the story, and that was the amount of apologising. It was just too much. The word sorry was used so often that it was bordering on ridiculous, and it did have an impact on my overall enjoyment and impression of the book. The ending was right for the story, and also quite cute. I’m glad Brandon and Tyler got their happily ever after. But it just wasn’t the powerful and profound, coming-out, first-love story it had the potential to be.