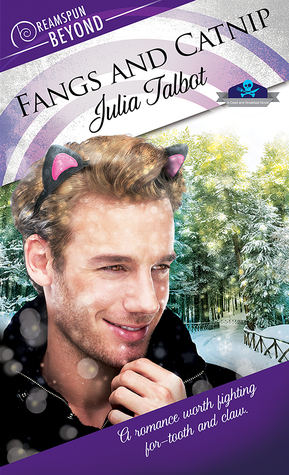 A romance worth fighting for—tooth and claw.
Solitary vampire Fallon Underwood gets all the social interaction he needs being the silent partner at the Dead and Breakfast B and B high in the Colorado mountains. Change is hard for Fallon, so when his business partner, Tanner, suggests hiring a new manager for the inn, he’s adamant that they don’t need help, especially not in the form of bouncy werecat Carter Hughes.
Carter is a happy-go-lucky kitty, and he loves the hospitality industry, so the D and B ought to be a great place for him. He falls for Fallon as soon as he picks up one of Fallon’s novels and begins to woo the vamp with gifts. When Fallon finally succumbs to Carter’s feline charms, the results are unexpected, to say the least. Their mating will have irreversible consequences—for their bodies and their hearts.

I greatly enjoyed reading Fangs and Catnip. I found the story to be original with a storyline that hasn’t been overdone. The story had great flow and was easy to read and had been nicely edited. The characters were developed and had characteristics and mannerism that fit with their paranormal selves.
I had no problem figuring out and believing that Tanner’s a bear shifter who would rather be hibernating for the winter instead of being the day manager. He has a snarky, gruff personality, but he’s also very protective of his friends and those he considers family. Sometimes his protective instincts get in the way and do more harm than good, but it’s always with the best of intentions.

Fallon’s also true to form with how he’s described in the blurb. He’s the perfect description of a solitary introvert focused on writing his books to the exclusion of anything else. He’s a silent partner in the Dead and Breakfast Inn and lives in the attic. If it weren’t for Tanner bringing him his meals and keeping him up to date on what’s happening at the D and B Inn, he probably wouldn’t have any interactions with anybody.

Fallon has a very hard time with change, and Tanner has the devil’s own time getting Fallon to agree that they need more help and to allow Tanner to hire a day manager for the winter season. But Fallon finally caves so long as Tanner does all of the interviews and nothing changes for Fallon.
Tanner ends up hiring a bouncy, happy-go-lucky mountain lion shifter named Carter. Carter loves the hospitality industry and is ecstatic about getting a coveted job at the exclusive Dead and Breakfast Inn. Carter loves the diverse clientele that the inn gets and enjoys working with his new boss Tanner.

My favorite client was Tom the bitten werewolf that’s having a hard time controlling his shifting. I liked how Carter and Tom bond as friends and play in their shifted forms out in the snow.
Carter, however, didn’t expect to find his mate in the silent partner of the inn, or that Fallon would be a vampire. But Carter has his work cut out for him with Fallon, who doesn’t feel the pull of the mate bond the same way that Carter does and doesn’t want anything to do with Carter. After having been rejected by his mate, Cater begins to woo his mate with gifts to try and win him over.
And it works, but their bonding will not be a walk in the park, and unless they can figure out what’s going wrong it may just kill them.

Pick up the book and find out for yourself just how they work out their problems and misunderstandings. I really enjoyed it and you probably will too.