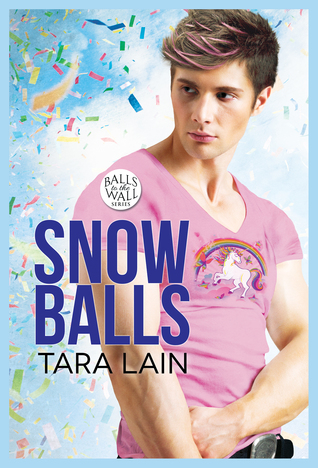 JJ LaRousse looks like a quarterback but acts like a queen. He’s trying to be proud of who he is—until a robbery at the famous Laguna Winter Fantasy brings JJ face-to-face with tough cop Ryan Star. JJ hears Ryan likes manly men, so he drops his voice an octave, colors his pink hair, and tries to pass as a football fan.
Ryan Star may be tough, but he keeps his sexuality to himself at work. He learned in New York that being a gay cop can be deadly. His attraction to JJ threatens his secret, but he’s finding it hard to back away from a guy who’s so totally his type. Then, during a ski trip and a confrontation with JJ’s biggest nemesis, all the façades come crashing down. In the aftermath, can Ryan love JJ for who he really is? More importantly, can JJ?

Snow Balls is another fabulous book in the Balls to the Wall series. Snow Balls is the sixth book in the series by Tara Lain. The story is well written, nicely edited, and has great flow. The characters are loveable and complex. I loved the storyline and getting to see cameos of the other characters in the series. I adore this series, and I was so excited when I found out that Snow Balls was going to be about JJ LaRousse.

JJ LaRousse is such a loveable queen. He has the biggest most outgoing personality. He will do anything for his friends. He works for David at his gallery and during the winter at the famous Laguna Winter Fantasy. JJ’s personality doesn’t match his looks, however. He looks like a quarterback, and if he were to take out the pink highlights in his hair and stop speaking with his hands, he could pass as a straight guy. And it has taken him a long time to become comfortable with who he is and not who his father wishes him to be. JJ hates sports and anything physical.

His idea of a good time is to go to the theater or socialize with his artist friends. I loved his excited manners and how everything he says or does has an extra helping of drama. The only thing missing from his character is that he isn’t a drag queen. However, he’s still young, and I could see him as a drag queen as he gets older. When the Winter Fantasy gets robbed, JJ is one of the few witnesses that both got a good look at both robbers and talked to them also. The officer assigned to the case is tough cop Ryan Star. JJ hears from a coworker that Ryan likes manly men, and so he drops his voice, hides his hair under a sports team baseball cap from a friend, and tries to pass as a football fan.

Ryan Star keeps his sexuality to himself at work. He learned in New York that being a gay cop can be deadly. He’s out to his captain only and his group of friends. Since he’s in the closet, he prefers to date manly men who he can pass as straight friends should anybody question why he’s out with a guy. When he’s assigned the case to question the witnesses at the Winter Fantasy robbery, he meets the perfect guy for him. JJ is everything he is looking for or so he thinks. He’s built like a quarterback, manly, and is into sports. They start off a relationship on the down low which looks like hanging out with a new straight friend to everybody else. But all good things have to come to an end. And when Ryan and JJ go on a ski trip, and his biggest nemesis confronts JJ, all the facades come crashing down. In the aftermath, can Ryan love JJ for who he really is? Can JJ?

I know the answer, but you’re going to have to read the book to find out. If you are a fan of Tara Lain books and this series in particular, then you don’t want to miss this story. I loved it, and I know you will too.

One thought on “Review: “Snow Balls” by Tara Lain”