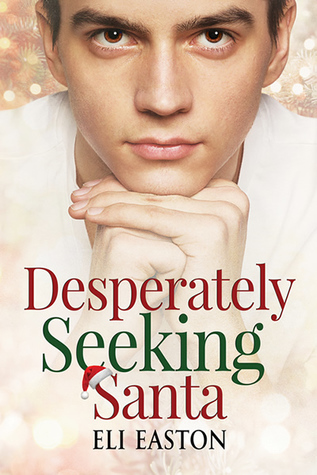 Journalism student Gabe Martin gets his first professional assignment—to write about a Christmas charity dinner that benefits a children’s home. It sounds like a total snooze-fest until Gabe learns that the event’s Santa is a mystery man. He shows up in costume and no one has a clue who he is. Uncovering Santa’s identity sounds like the perfect angle to turn a fluff piece into serious journalism.
Mack “The Mountain” McDonall, at 6’10”, is University of Wisconsin-Madison’s enormous star wrestler. When Gabe first claps eyes on him at a wrestling match, it’s lust at first sight. Gabe’s friend, Jordan, sets up the pair on a date. But when Gabe chatters on about his plans for outing Santa, Mack goes cold, and their first meeting becomes an epic fail.
As Gabe researches the children’s home, he learns that Mack has secrets a guy famous for being a brute wouldn’t want the world to know. Can Gabe find his holiday spirit, write a killer article, win the heart of a surly giant, and give everyone a very merry Christmas?
NOTE: This 50,000 word short novel features a new couple but includes Jordan and Owen, from the author’s book “Superhero”. It can be read as a stand-alone.

First of all, I’m just going to say how much I freaking love Christmas and everything about it, stories, movies, songs, bring it on, I can’t get enough. I’m probably worse than a child *giggles*. So as you can imagine, when I saw this book, I knew I had to read it. I’ve read a few other Christmas themed stories that this author has released, and I really, really loved them, so I had high hopes for this one, and I wasn’t let down. It was the most perfect, sweet, heart-warming, feel-good Christmassy story I could have asked for, and it had just enough emotional scenes to get me choked-up and teary eyed before leaving me smiling with joy again.

Gabe Martin is a journalism student who’s also working as an intern at the local newspaper, the Wisconsin State Journal. Gabe wants to be an investigative broadcast journalist, getting down in the nitty-gritty of the big stories, but instead, his boss has asked him to cover the piece they do for the charity dinner that benefits the local children’s home. Gabe thinks that it’ll be too boring and no different to every other year that the story has been run, so tries to find a way to make the story more interesting. When he interviews the people who organise the dinner, he discovers that for the last four years, there has been a new Santa coming to give all of the children their gifts, but no one knows who he is. He just comes in, sees the children and then leaves again without sticking around to speak to anyone else. Gabe thinks this is the big story he’s been looking for, so he plans to find Santa and show the town who he is.

When Gabe’s best friend, Jordan, asks him to go along with him to his boyfriend’s wrestling meet, Gabe agrees to go, even though he knows nothing about the sport. But when they take their seats and the college team enter the gym, Gabe is immediately drawn to the biggest member of the team, Mack, who is the only undefeated wrestler in the team’s history.

Mack McDonall is the college team wrestling star. He’s won every match he’s fought in and isn’t intimidated by any of his opponents. Everyone around him has told him he has what it takes to go pro, but Mack isn’t interested. He plans on becoming an engineer and working with coastal cities to help with their defenses to prepare for the effects of climate change. Looking at him, he’s the kind of guy you wouldn’t want to meet down a dark alley. His size and reputation as an undefeated wrestler tend to scare most people off, but away from the public and the gym, Mack is the opposite of what everyone thinks. He tends to keep to himself and is gentle and careful with his movements so as not to frighten anyone or cause a scene. Underneath the big burly exterior, is a gentle giant with a huge heart.

Gabe and Mack are definitely interested in each other, but Mack hasn’t had an easy life and finds it hard to open up and trust people, so dropping his guard to let Gabe in, is no easy task. And when Gabe tells Mack of his plan to find the secret Santa, Mack doesn’t know if he can be with someone who could invade someone’s privacy like that and possibly end up hurting the children at the home because if it.

Everything about the story was wonderful. I can’t find a single negative comment to make about it. Mack was just an amazing man, he could thaw the Snow Queen’s heart he’s that special. This is a book I will read again and again. I know Christmas stories aren’t to everyone’s taste, but if you do enjoy them, then this should definitely be high on your TBR list this year, you really won’t be disappointed. But have the tissues ready too.