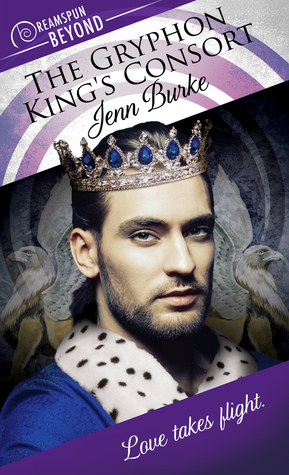 Love takes flight.
The sudden death of the Gryphon King throws the kingdom of Mythos into uncertainty, and Crown Prince Luca rushes both his coronation and an arranged marriage to a man he’s never met. Eirian is young and idealistic, and while they both want what’s best for their people, their philosophies couldn’t be more different. While Luca believes in honoring tradition, Eirian is determined to infuse modern values into their kingdom of magical creatures. When given the choice between loyalty to his husband and his own crusade, Eirian makes a decision that might doom their marriage.
Still, Luca is committed to making their union work, and that means forgiving his brash consort. But when Eirian becomes the target of a deadly conspiracy, Luca must act fast—or forever lose the chance to explore their burgeoning love.

The Gryphon King’s Consort by Jenn Burke is the tenth book in the Dreamspun Beyond series. This book was a perfect addition to the series. It was hot, edgy and had drama, politics, temper tantrums, misunderstandings, an arranged marriage, and a deadly conspiracy. And the author did a good job hiding who the bad guy was because I totally got it wrong. I loved the book and both Luca and Eirian. I also loved that the gryphons could turn into different forms. They had an eagle, lion and gryphon form. I also loved that Gryphons are pansexual and homo-romantic and they get together at a yearly event to obtain breeding contracts.

The sudden death of the Gryphon King throws the kingdom of Mythos into uncertainty, and Crown Prince Luca isn’t ready to take over as the king. On the advice of his father’s trusted advisor and council member, Orel, Luca rushes both his coronation and an arranged marriage to a man he’s never met.

Eirian’s picked out of a stack of possible consorts based on his modernist ties. With Luca’s traditional ties a union with a modernist will show their people that both sides are being taken into account during council meetings and decisions. However, Eirian’s young and idealistic, and while they both want what’s best for their people, their philosophies maybe to too different to make their new relationship work. While Luca believes in honoring tradition and has for a long time, Eirian is determined to infuse modern values into their kingdom of magical creatures.

However, Eirian will also be advised by Orel that his job isn’t to vote for what he believes in and his values but to support whatever decisions that his new husband and king makes in order to show a loyal and united front. Will Eirian be able to suppress his beliefs and values to support his new husband or will he have to be true to himself?

Eirian’s chosen as the next consort. Normally he would have a five-year courtship and lessons in how to rule and support his new husband in his new role before getting married. But that is all thrown out the window with the King’s death, and Eirian only gets thirty-six hours before the wedding. He doesn’t get the lessons or anything to help him adjust to his new role. He has to learn how to sink or swim. And his new ocean is a sea of traditionalists where he has only ever swum in a sea of modernists. Eirian definitely has an uphill battle on his hands trying to get the council and his new husband to see the modernist side to problems and how to solve them.

But one too many misunderstandings is making Luca second guess taking Eirian as his consort. But before Luca can do anything he might regret, Eirian becomes the target of a deadly conspiracy, and it makes Luca realize just how much Eirian has wormed his way into his heart. Now he just has to figure out how to get his consort back safe and sound.