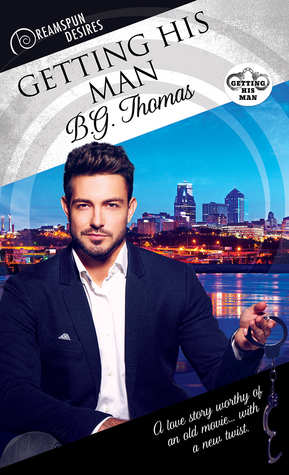 A love story worthy of an old movie… with a new twist.
Artie needs a hero, a man like those he’s always revered in Golden Age films. His drug-dealing jerk of a roommate got him arrested, and since his savior isn’t likely to sweep in and save the day, Artie calls a bail bondsman.
August has always imagined himself a hero from a black-and-white movie, but he’s never found a man willing to let him play that role—at least not until he gets the call from Artie.
Both of their dreams might come true, but not before August must use his skills as a bounty hunter as well as a bondsman. Artie is on the run for his life, and August must protect him and help him clear his name. Only then can they both finally get their man.

When I saw this book, I wasn’t sure what to expect. Although I love a good crime story with a bit of romance included, I’d never read anything about a bail bondsman/bounty hunter. But I have to say I was pleasantly surprised, because this book was a really sweet and enjoyable story, and I couldn’t help the smile I found myself with when I finished.

Artie Bailey is twenty-four years old but looks a lot younger. He’s always been attracted to men who are a few years older than him, especially when they’re tall, masculine and sophisticated. But Artie can’t seem to find anyone who wants anything more than sex from him. Everyone he meets that he thinks he would like to go further with all tell him the same story, that they want a manlier man as a boyfriend or husband material. Not that Artie looks feminine in any way, he’s just smaller in stature and looks young, so most people don’t really take him seriously. His best friend Ross is exactly what Artie wants in a man, and although Artie has a little bit of a crush on him, he’s happy for things not to go any further, because he’d rather have Ross as a friend than nothing at all. And he knows that he can trust and rely on Ross to be there for him no matter what. Artie shares an apartment with Willie who’s a small-time dealer, and he absolutely hates it because Willie’s always partying and smoking pot with his friends, and has no consideration for Artie at all. When the cops wake Artie up in the middle of the night and arrest him for drug dealing, he has a mini meltdown. Artie is as straight-laced as you can get. He doesn’t swear, he barely drinks alcohol never mind do drugs, but he’s also quite naïve and always wants to see the good in people and situations. So when he’s taken to jail at the police station, he automatically jumps to the worst case scenario and thinks his life is over.

August Sterling may be a bail bondsman and bounty hunter, but he’s not the rough and tough guy people expect him to be. August is a complete gentleman with impeccable manners to match. He loves eating at fancy restaurants, going to the theatre to take in a show, and relaxing at home with a nice glass of wine and some jazz music. He wants a man who he can take care of, but who can also be independent and know his own mind. August doesn’t want someone to control, but someone he can look after and share his interests with. When August’s office gets a call about Artie needing to be bailed out of jail, he goes down there not expecting anything more than another young guy getting caught for committing a crime he’s clearly guilty of. But when August sees Artie, he knows straight away that this is not one of his normal cases. Artie is a nervous, emotional wreck, and seeing him looking like he does, and clearly in need of help, gets August all worked up. Because Artie is exactly the type of guy August would go for in any other situation, and the fact that they’re standing in jail does nothing to stop the lust and attraction August’s feeling.

August can’t help but feel a kind of protectiveness towards Artie when he hears what happened to him, so he promises to try and help Artie clear his name. As the two men spend more time together, they become closer, even though August knows it would be unprofessional to go any further, but there’s something about Artie that makes him want to throw all the caution aside and just go with his heart. August and Artie discover that they have a lot of things in common, except for musical tastes, and the more they learn about each other, the harder it is not to cross the line that’s been set. When Artie’s life is threatened by some gang members, August starts calling in some favours he’s owed, because he’ll never let any harm come to the man he’s started to fall for in a big way.

This book was honestly just a fabulous little read. Yes, it was sometimes sickly-sweet, but I really didn’t mind at all. It was quite a slow-burn romance, but again it worked well for the story. August was a brilliant character, he was the classic dream man, and I seriously had butterflies in my tummy every time he did something nice for Artie. Another thing I liked, was that for once the cover model actually resembled the picture of August I had in my head, so well done to the author and cover designer for getting it right. I think it really does make a difference, especially when its such an important character.

I know not everyone enjoys extra-sweet romance, but for me, this was a winner, and I loved that I got the chance to read it.

One thought on “Review: “Getting His Man” by B.G. Thomas”