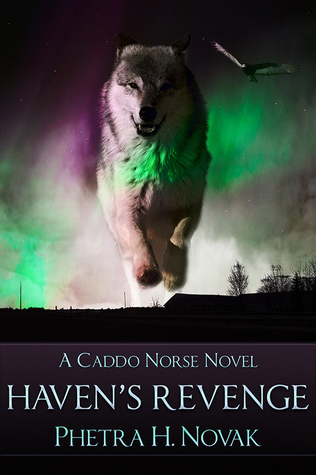 Haven Naranjo is a proud Caddo Indian, with a frightening past. He was a mere fifteen year old boy when he found his parents, part of his tribe, and his high school sweetheart slaughtered by a wereman gone mad. Falling victim to a system that is not always prepared to deal with a shattered young mind, Haven finally gives up on himself. He grows up to be bitter and hateful toward the creatures he hates. Werewolves.
Alexander Prescott is the younger of the two Prescott boys and comes from a large werewolf clan. But things are bigger than that. Alexander, is the true vessel of the Fenrir Ulv and is to become the leader of all supernatural beings, the King of Wolves. On top of that, he’s in love with Haven. He’s known since he hit puberty that Haven is his true mate. But there’s one problem, Haven hates what he can become. However, Alexander has a plan on how he is to charm his, and his wolf’s way into the grumpy Caddo Indian man’s heart.
But fate has other plans for them. The Asa Guard enters their calm country living, determined to use their own kind against them and kill the true vessel—Alexander Prescott.
When war between the Asa Gods and the Fenrir Ulv starts knocking on their door, what side will the damaged Haven choose? Will he find a way of trusting those, especially Alexander, who he feels has betrayed him and let his animal, the eagle, lead him straight to his fate by his mate’s side? Or will he trust the words of strangers, who come to make his quest of seeing all shifters dead a reality?
Haven’s Revenge is a story of an emotional journey for a whole community. It’s about finding acceptance not just from others but in yourself.

Haven was 16 years old when all his family, his boyfriend and other members of his clan – Caddo- were murdered by a wereman. 10 years later, Haven has developed a hate against shifters and werewolves particularly and lives his life like he was dead with his family.

Alex was 12 years old when Haven’s family was killed. He’s a werewolf, the most powerful of all the shifters and he’s designated to rule all the paranormal world. Alex knows that Haven is his true-mate. 10 years later, Alex is ready to embrace his destiny with his mate by his side.
Between Alex’s destiny, Haven’s hate of the paranormal, and a war coming to them, Alex and Haven will have to fight hard to reach their path together.
I loved this book, I loved the theme and the originality.

The author did a great mix between Native American legends and Norse mythology, making it captivating and interesting, so much I couldn’t stop my reading.
Haven’s hurt, traumatize and in pain, but even if I understood that, I couldn’t help but want to hit him in the head, like repeatedly, because he was just an asshole sometimes.
Alex is sweet, confident and powerful, and because of his destiny, he’s going to rule all the paranormal when he receives the Fenrir Ulv spirit, as he’s his true vessel. But even knowing that, Alex doesn’t use his power against anyone. I love that, how he stays focused on his goal, Haven.

The book wasn’t only focused on them. The secondary characters are as important in the plot as Haven and Alex. They all have a role in this future for the paranormal world, and I want, no, need to read more about them (especially Reid).

I really enjoyed the book, the story and the plot. The fact that it was a mix between Native American legends and Norse mythologies was very original in my opinion.
This book was the first one of the series, it presented the plot and the characters. The first step is reached in this one, Alex and Haven mating and embracing their destiny. I can’t tell you much, you need to read it because there’s so much more about them.

I can’t wait to read the next book, there’re so many things that we need to learn yet.

It’s 4 Optimumms for the Wolf and the Eagle.