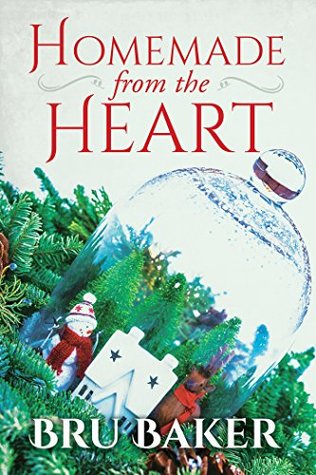 Craft store owner Grant has always been a sucker for a pretty face, and that goes double for a pretty face with an adorable sidekick. When seven-year-old Aubrey has her heart set on taking Grant’s already-full holiday craft series, he caves and gives up his one day off a week so she (and her hot guardian, Josh) can take private lessons. Their flirting ramps up week after week, and even though Josh isn’t with Aubrey’s mother, Grant can’t be sure the man isn’t straight. Maybe he’s just being friendly. And Josh, who most definitely is not straight, is afraid of being the creepy guy hitting on the teacher.
Frustrated by their stubbornness and cluelessness, Aubrey takes matters into her own hands. She decides the best gift to give Josh is something homemade and from the heart—a boyfriend they’ll both love.
A story from the Dreamspinner Press 2017 Advent Calendar “Stocking Stuffers.”

I adored Homemade from the Heart by Bru Baker. This is a story from the Dreamspinner Press 2017 Advert Calendar “Stocking Stuffers.” The story was well written, and it was full of feel-good holiday cheer.

This story is about a seven-year-old Aubrey that has her heart set on taking Grant’s already full holiday craft series. However, the craft store owner Grant caves and gives up his one day off a week so she and her guardian Josh can take private lessons. As their weekly flirting ramps up, Grant is still trying to decide if Josh is straight or not, and Josh isn’t straight, but he doesn’t want to come across as the creepy guy hitting on the teacher. With the help of a seven-year-old matchmaker, Josh will get the best gift that she can give him; a homemade from the heart one in the form of a boyfriend.

I loved the storyline, and Aubrey was the cutest seven-year-old matchmaker. She had so much energy and love to pass around. Aubrey had me laughing on more than one occasion. I loved that she wanted to make homemade gifts for her family members. I also loved her hot guardian, Josh. I liked how he will do anything to make her happy even if it means having to pay for private lessons on a Sunday. Grant had a heart of gold for being selfless enough to come in on his day off and allow Aubrey and Josh to take private lessons since the holiday craft series is already full. Of course, he isn’t completely selfless since his primary reason for doing it is because he thinks Josh is hot and he wants to get to know him more even if he’s pretty sure that Josh is straight.

But that doesn’t stop Grant from teaching Aubrey how to make the best holiday projects for her family. My favorite holiday project that they did was the cross stitch pillow for her mom and how Grant helped her modify the pattern to match a pillow that her mother had when she was younger. I loved the innuendos that were passed back and forth between Grant and Josh. My only complaint was that the make-out scene was interrupted and then not finished. I really wanted it to be finished. Otherwise, a truly enjoyable Christmas short story.