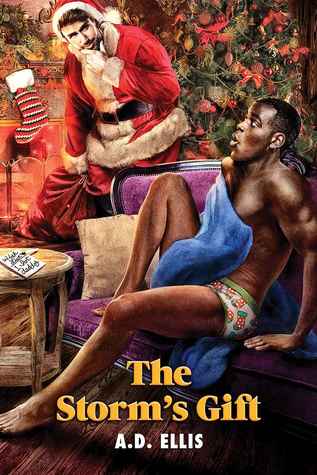 Snowed in together in their college dorm, two men share a quick connection that creates enough heat to spar with the blizzard outside.
Rory Blackwell plans to rejuvenate his mind and repair his battered heart after his world is shaken by an unexpected breakup. James Austin’s freshman-year plans of improving his social life crashed and burned, leaving him feeling as alone and outcast as he did back home.
One man is hurting while the other is eager to provide comfort. One is a virgin, the other experienced with other men. Both are looking forward to Winter Break, but can they take full advantage of their situation—or will the passion ignited between them fizzle out with the storm?

The Storm’s Gift by A.D. Ellis is a story from the Dreamspinner Press 2017 Advert Calendar “Stocking Stuffer.” This is a cute Christmas short story. It has just enough storyline and background on the two main characters, Rory and James, to make them interesting. There is definitely an instant love feel to the story. I liked the virgin freshman and the experienced senior storyline. I would be interested in reading more about these two and what happens to them after winter break and when Rory graduates and James is still only a sophomore.

Rory Blackwell is the Resident Advisor for the freshman dorm. He’s recovering from an unexpected breakup. He doesn’t have any plans to go anywhere over the winter break. He just has to wait until all of his charges have left before his vacation can begin.

James Austin’s plans for improving his social life crashed and burned so far for his freshman year. He tends to stick to his room, studying, instead of socializing. Hence the reason that he is still a virgin. He wasn’t able to make it home for Thanksgiving due to lack of finances, but he is determined to make it home for winter break. But a huge winter storm has other ideas, and the blizzard has closed all of the major highways home. But James isn’t at all happy about having to stay in the dorms for winter break. Although getting to stay with the RA that he’s been crushing on does have its benefits. And one of them is having to share body heat for warmth.

Rory also isn’t too disappointed that he’s going to have to spend his winter break with James. Truth to be told, he’s also had a crush on the cute freshman, who spends all of his time studying. He can’t believe that James is still single and he’s more than happy to help him get rid of his virginity.

I liked the happy for now ending, but I would love to read more about these two characters and what happens to them next.