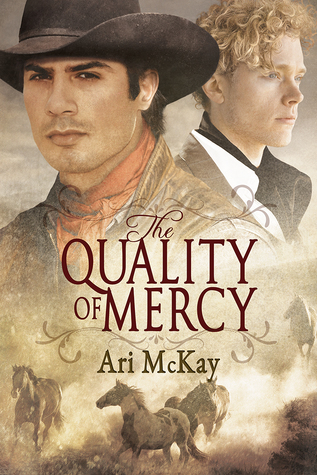 Gil Porter and Matt Grayson’s Bent Oak Ranch in Mercy, Texas, is a rare haven for gay men in the nineteenth century, and their friend Carlos Hernandez will need it when a man from his past unexpectedly comes back into his life.
Jules Wingate hopes to start over in Mercy as the schoolmaster after a scandal sent him and his son fleeing their former home. But he discovers he’s left one bad situation for another when he encounters his former student and lover, Carlos. No matter how Jules tries to resist, he yearns for the passionate connection they once shared… before Carlos broke his heart.
Carlos knows his foolish, immature actions hurt Jules, but he desperately wants a second chance and to show Jules he’s changed. But trust so badly broken is hard to repair. While he works to earn Jules’s forgiveness, someone else at the ranch has his sights set on Carlos—and he doesn’t care how many lives he has to ruin to make Carlos his and his alone.

I really enjoyed The Quality of Mercy by Ari McKay. It’s the second book in the Bent Oak Saga. This is the first book in the series that I have read, and while Gil and Matt— from the first book in the series, Finding Forgiveness—are in the second book, they are there only as supporting characters. The book is a standalone and focuses on Jules and Carlos. I do, however, want to read Finding Forgiveness because I do find Gil and Matt to be great supporting characters and I want to know more about how they become a couple and start the Bent Oak Ranch.

I liked the storyline and the characters in the book. I did think that the story could have been written without the cheating element from when Jules and Carlos had been together in the past. I get that Carlos was young and not ready for a permanent relationship and wanted to roam and sow his wild oats but he could have just left instead of cheating on Jules and betraying their relationship in that way. I’m not sure if I could have forgiven him even ten years later for having betrayed me in that way. However, this is a book and not real life. I do think that the author has done a great job of showing that Carlos has done a lot of growing up and maturing in the ten years that they have been apart and that he’s ready to be in a committed relationship and can prove that he’s trustworthy. After all, he has plenty of opportunities to get with the hot younger ranch hand Caleb if he was still a cheater.

I did really like Jules and how he interacts with the children, and later with the ranch hands that he teaches. He also has a great relationship with his son, Alex, who gets a job at the Bent Oak Ranch and is assisting Carlos with the horses. Of course, his son doesn’t know that he is gay, but that’s the time period that they’re in. Where you can’t be out and proud and being different can get you killed. I liked that the Bent Oak Ranch is a rare haven for gay men in the nineteenth century. I also like how Gil and Matt play matchmaker between Carlos and Jules by having Jules come and live at the ranch when he breaks his leg and needs to be taken care of. I especially like when they move both him and Carlos into the empty Foreman’s house, which gives them privacy and forces them to be together so that they can’t escape their chemistry and attraction to one another.

Overall an enjoyable story. For me, the cheating aspect in the past wasn’t an issue, but I know a lot of readers don’t like to read books with cheating in it, especially when the book would have been just as good without it.