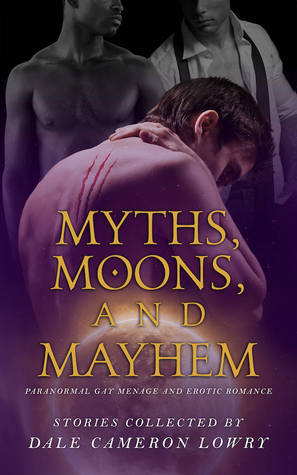 Penned by favorite authors such as Rob Rosen and Clare London, as well as by newcomers to the genre, Myths, Moons & Mayhem is an eclectic mix of paranormal lust and polymythic beings that will spark your fantasies and fuel your bonfires.

Inside Man by Clare London—At a London pub, a tear in the veil between the dead and living opens up new possibilities for a ghost who could only ever watch the men he desired, but never touch.

The Secret of the Golden Cup by Rebecca Buchanan—A classics professor finds himself at the center of a magical war. With an unfairly attractive student and a campus janitor as his only allies, can he stave off the forces of evil?

When The Big Moon Shines by Carl Redlum—A college student is intent on hunting down the man who turned him into a werewolf. But his mouthwatering neighbors keep getting in the way.

Careful What You Wish For by Elizabeth Coldwell—Josh dreams of meeting Mr. Right, so his roommate offers help with a love spell. Neither man is prepared for what happens when the spell begins to work.

The Cave by Dale Cameron Lowry—Losing sleep to the sounds of his tent-neighbors’ nightly lovemaking has nature photographer Ethan at his wit’s end. What kind of magic can convince the two men he should join them?

The Endless Knot by Morgan Elektra—The fiery romance between a vampire and a werewolf threatens to burn itself to the ground until a human teaches them to temper the flame.

Squatchin’ by Greg Kosebjorn—Two Bigfoot hunters get more than they bargained for when they set out on an overnight camping trip to trail the legendary beast.

Celyn’s Tale by Rhidian Brenig Jones—A young Welsh farmer is haunted by visions of his future lover, only to discover that the lover is not one, but two—and not exactly human, either.

Close Encounter of the Three-way Kind by Rob Rosen—In this quirky comedy, aliens arrive from another galaxy, but they’re more interested in consensual exploration than invasion. Alien probing never felt so good!.

This was a very enjoyable anthology with some really hot gay erotica. They are short stories that are a menage of sorts. They have everything from ghosts, vampires and wolves, witches, bigfoot and aliens. If you’re looking for something to get your libido going, these short stories are written to do exactly that.

Inside Man by Claire London: This story starts out with a ghost that misses the ability of touch, even touching himself. He’s watching this young couple and admiring them. He notices some tension between them and decides to follow them home. He feels their love and need for each other, but they are fighting against it. With his ghostly abilities, he figures out how to help them and himself at the same time.

The Secret of the Golden Cup by Rebecca Buchanan: Grover Benson is a professor and discovers an authentic Minoan Linear B cup. No one could believe it was found in the school’s basement. All he had to do that day was get to the lecture room, collect term papers from the students and grade them. Then he could get started on interpreting the cup. As usual, the hot student that sat in H 12, was there and wrote his term on homoeroticism. This student had invaded his dreams all semester, and this paper did not help his libido. Dominic is student H 12 and Steffan is his significant other. This was where they get crazy over the cup and how these three men save the day while it ends very hot and sexy.

When the Big Moon Shines by Carl Redlum: Henry’s parents have moved him to the middle of nowhere to protect him and any victims at the full moon. They have to put him in shackles to keep him locked up so that he and others can survive. As his parents left for the day, they told him to not leave the house. Well, just like most children, he did not listen and he roams through the woods around his house. As he’s exploring, he picks up a scent and has to see where it is coming from. He discovers a sexy man chopping wood, and after a bit, sees his lover as well. He believes he gets away unnoticed, but as nightfall begins to descend, after he is locked up in his basement, he learns why the scent was so heady. These wolves are super-hot and are sexy together.

Careful What You Wish For by Elizabeth Coldwell: Josh is a lonely guy wanting to find love. His roommate, Aaron has Eric, and Josh is sick of hearing about their great sex life, how big Eric’s schlong is and so on. He’s surprised when his roommate comes walking in one evening because Aaron and Eric were supposed to go out. After a few drinks and sitting around shooting the breeze about love and all, Aaron tells Josh how his family history deals with spells, and he has a love spell that he wants to try on him. They head up to the attic and get everything ready for the spell. What comes next is shocking and hot as hell.

The Cave by Dale Cameron Lowry: Ethan is part of a paleontological expedition team and is sitting next to Heather by the fire after a hard day. He’s always tired after having to use magic. They’re getting worked up listening to Mendrika and Joseph going at in their tent. In fact, Ethan is half hard listening to the sweet sounds, and the more he gets turned on, his magic makes the fire spark up. After Heather heads to bed, Ethan lets his imagination grow wild with his fantasies about these men having sex. The fire begins to rise and dance to his fantasies. The heat these three create is smouldering hot.

The Endless Knot by Morgan Elektra: Jackson is a vampire that is not a fan of human blood. He prefers the tangy flavor of wolf blood. That is until he runs into the sexy little human known as Beau. Only once before has he felt this intense lust he has going on right now. He immediately wants to kiss him and is so turned on watching his sexiness swaying towards him. As these two are getting acquainted, Jackson smells the all too familiar wolf scent. This scent is the first scent that causes so much lust, he can’t control himself. It’s Rafael, his favorite wolf. These two go way back but always end up fighting and going separate ways. Well, Beau has plans for these two sexy studs, and he plans to never let them go.

Squatchin by Greg Kosebjorn: Jason and Dan have been together for a couple of months and are totally smitten with each other. Jason is obsessed with finding a live Sasquatch. They are in the Oregon woods in search of one. They get to a point of traipsing through the woods and decide to set up camp. After some hanky-panky in their tent, they hear, and then see, a large subject outside their tent. Jason gets all excited, and Dan is scared but soon realizes it is just a man as the man opens their tent and flashes a flashlight in their faces. They end up going back to Martin’s place and learn that his lover and love of his life died last year. When they console Martin, things heat up.

Celyn’s Tale by Rhidian Brenig Jones: Celyn often dreams of the fair folk dancing in the woods with these intense set of green eyes and set of blue eyes. These two always encouraged him to touch himself and get a release. He can kinda make out these men in his dreams, but they are just that, dreams. One day, he is going about his day and goes in for supper. Both his parents try to convince him that he needs to settle down with a nice maiden and start having children. He does not want this and is scared he will be alone forever. As he is walking, he realizes he’s ventured further than he should, but then there they are. Those sets of eyes from his dreams. Cai and Taliaris introduce Celyn to such intense pleasure, he never wants it to end. Well, he has a tough choice to make, but their offer is oh so appealing.

Close Encounter of the Three-Way Kind by Rob Rosen: Aliens have invaded earth and have settled in Africa and Europe. The deal was they would stay there, but humankind had to move from those locations. Luke is at home one day watching his sexy German neighbor, who runs around naked with the blinds up and is stroking himself. Suddenly, he’s interrupted by a loud noise in his backyard. Spandex, the alien, sensed high arousal and wants to study this sexuality. They end up going to the neighbor’s house, Hans, and they explain the need for this study. Plus, the difference between them and this alien and why the alien needs both of them.