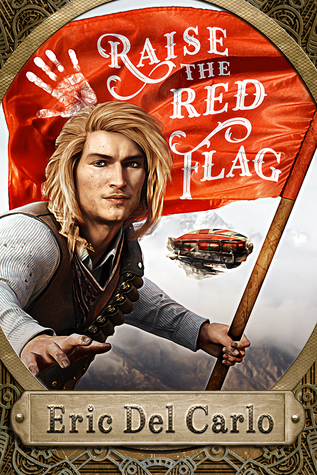 In an 1867 that never was, the American colonies are finally gearing up to revolt against oppressive British rule enforced by advanced technology. British airship captain Hamilton Arkwright is captured by the rebels when his vessel is commandeered. The insurgents are also aided—reluctantly—by young Jonny Callahan, a thief and ne’er-do-well who would rather carouse on the streets of New Orleans than fight for independence. When the two seemingly opposite men are thrown together on a harrowing journey across the war-torn colonies, they must grudgingly rely on each other for survival. Despite their efforts to resist, the attraction between them threatens to throw a wrench in their plans to remain enemies.
They battle their way through American guerrillas and a demolition-derby-type highway to reach the decimated streets of Chicago, where British forces are preparing to commit a war crime of enormous magnitude. Though affection has grown between them during their mission, they are still on conflicting sides, and they may have to choose between loyalty to their causes and their love.

Raise the Red Flag is an alternative history fiction story mixed with a little bit of steampunk. From reading the blurb, this book seemed to cover a few of the sub-genres that I love, so I knew I had to read it. Unfortunately, for me, this book just didn’t quite live up to the expectation.

Hamilton Arkwright is the twenty-eight-year-old captain of an airship in the British Navy’s Royal Airborne Fleet. Hamilton was born to a British military family in America, but due to him being “American” he will never progress far up the ranks. Even though he knows that people look at him like he’s an outsider, he’s fiercely loyal to his position and the Crown. Hamilton has known for years that he was attracted to men, but he’s only ever had the occasional hook-up as it’s too dangerous to pursue/risk anything else. When Hamilton arrives in New Orleans, he hears the other men talking of bars that should be avoided, but these are exactly the bars Hamilton is interested in going to. At the bar, he meets Jonny or J.C. as he’s calling himself, and the two men decide to take their night further and head to Jonny’s room. As they head out, Hamilton and Jonny are met with a group of three men who attack Hamilton and bundle him into their vehicle. Too late, Hamilton realises that Jonny isn’t the man he thought he was, and that he was part of the attack plan the whole time.

Jonny Callahan is a twenty-one-year-old petty criminal and member of a street gang in New Orleans. Jonny was born in New York, but due to his criminal activity, he never sticks around in one place for any amount of time. Since arriving in New Orleans, Jonny has been with a few men, most importantly, Kane, the boss of the street gang he’s part of, but Kane discovered that Jonny was also seeing other men too, so now he’s keeping his head down and trying to stay away from all of the places that he knows Kane may go. When one of the members of the gang talk Jonny into helping lure a British airborne captain away so as they can capture him and his ship, Jonny doesn’t realise what he’s got himself involved in until the act has been carried out and there’s no going back.

While on the ship together, Hamilton and Jonny find that they are very attracted to each other, even after everything that’s happened. They agree to work together to get out of the situation that they’ve found themselves in, but will go their separate ways afterwards without taking things further between them. That plan seems like a good idea until their situation takes another unexpected turn, and the two men are forced to stick together for safety’s sake. Along the journey, they grow closer and feelings develop that neither man expected. But when Hamilton finds out about a plan that the British are going to implement, for the first time in his life, he’s conflicted about where his loyalty stands. Is it with his job and the British, or with the man he’s come to care about and the Americans they’ve met along their way?

I have to admit, I did really struggle with this story/book. I found it very hard to get into when I started reading, and the main reason was due to the vocabulary that was used. Now, I’m far from being a literary genius, but I’m not brainless, and I found it difficult to put some of the words into context to understand the meaning. I’m British, English is my first language, yet I had to really concentrate on what I was reading a lot of the time, which took away from me being able to enjoy the storyline. I think someone who doesn’t have English as their first language will have issues with this book and the writing. I also didn’t really feel like the relationship between Hamilton and Jonny came across as realistic. I mean they had only known each other a couple of days, and part of that was under false pretences, and Hamilton was thinking that he had fallen in love with Jonny. There’s insta-love, and then there’s forcing something to make a plot work, on this occasion it felt forced and insincere. Don’t get me wrong, the longer the book went on, the better it got. And from around seventy-odd percent, I started to really like what was happening plot-wise, and found myself liking the characters too. It’s just a shame that it took so long to get to that point.

For me, this book was more of a miss than a hit, but maybe that was due to not being able to enjoy it right from the start. There’s nothing to say that you won’t love it from the very first paragraph. As they say, each to their own.