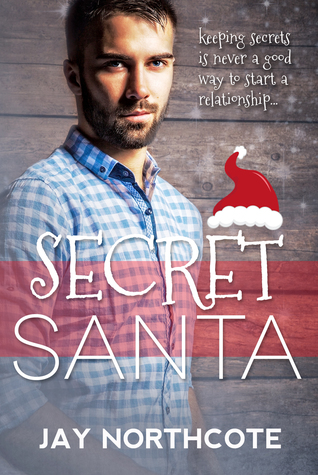 Keeping secrets is never a good way to start a relationship…
Theo hardly has time to date. Between work and caring for his four-year-old son there aren’t many hours left over. He’s lonely though, so he joins a hook-up app and starts chatting to a guy called Luke. Luke seems friendly and they arrange to meet. Theo doesn’t mention that he has a child. It’s early days and he’s worried about putting Luke off before they get to know each other.
Luke is currently working as Santa at the local shopping mall. He figures Theo never has to know. Christmas will be over soon and Luke will move on to a new, less embarrassing job. He’s surprised when Theo and a little boy visit Santa one afternoon. Theo doesn’t recognise Luke, and Luke realises he’s not the only one with a secret.
Despite misgivings on both sides, they start dating, and the chemistry is amazing. But as Christmas approaches their secrets pile up like colourful packages under the tree. If they’re not careful, they’ll lose the best gift of all—each other.

This was a great holiday read. I enjoyed the storyline, the characters and how smooth it was written. Jay really brought me into the story, and I got to feel a kaleidoscope of emotions. I felt happy, sad, frustrated and even got hot. I felt like I was sitting at the mall watching their story play out in front of me. This story felt heartfelt and not out of the realm of reality.

Theo is sort of the geeky type and worked as an IT guy at the apple store. He was also a daddy to four-year-old Archie. He split time with Caroline, Archie’s mom, so they both could spend equal time with him. This didn’t leave much room for dating. He had been on this dating site before but usually disappointed. Most guys just wanted to hook up, and that’s not what Theo wanted. Nope, he wanted a boyfriend. He decided to check out it one night anyway, and that’s how they began talking.

Luke was more of a relaxed man that did what he had to in order to pay his bills. Right now, that was playing Santa at the local mall. It wasn’t his favorite job, but he played a good Santa for the children. He was going to start working at a better job after the first of the year. One night, he got on the dating site and saw Theo’s profile. He liked what he saw and struck up a conversation with him. The conversation was great, and they swapped pics. They decided on a date, and both went to bed excited about their future date.

The day of the date, Theo had to cancel last minute because Archie got sick. Now mind you, Theo has not told Luke he has a kid. He’s learned that it can throw some guys off, so he figures he will see how it goes before he says anything. Archie gets better, and Theo takes him to the mall. Archie LOVES to ride the train and always wants to go ride it. After the train, Theo takes Archie to see Santa. Well, Luke did not tell him he was Santa. When it’s Archie’s turn, Luke recognizes Theo from the pictures.

You see where this is going, don’t you? Honesty is always the best policy, but these two are starting off all wrong. Will they get to their first date? Well, of course they will, otherwise this book would not have been written LOL. But can they get past the secrets? Can they build a relationship that started with deceit? And most important, how many train rides will Archie get?