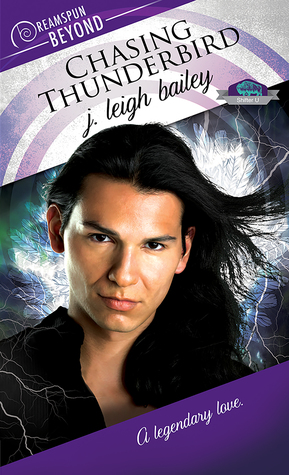 A Shifter U Tale

Ornithology professor Simon Coleman’s reputation is at risk, and the only way to save his name is to prove thunderbirds are more than creatures of Native American myth. Grad student and part-time barista Ford Whitney has a lot on his plate, but it’s also his duty to make sure the resident bird nerd doesn’t discover shape-shifters—like himself—live on campus.
When a series of incidents related to Simon’s search put him in harm’s way, Ford’s instincts kick in, and they become closer than is strictly proper for student and teacher. Ford is forced to reveal his secrets to Simon, and their relationship is put to the test—Simon must choose between salvaging his reputation and protecting the man who protected him…

Chasing Thunderbird by J. Leigh Bailey is the second book in the Shifter U series and book thirteen in Dreamspun Beyond series. I didn’t realize this was the second book in the series when I read it. And after reading a couple of the other reviews on Goodreads, I have a feeling that I missed out on a lot of inside comedy and knowing what kind of shifter Ford was since it was revealed in the first book Stalking Buffalo Bill. However, I did enjoy reading Chasing Thunderbird.
The story’s told through Simon’s first person POV, so we don’t get to know what Ford’s thinking or feeling except for how he reacts to what’s going on. I did like Cody College and all of the strange happenings that go on like when Simon attends a bird watching club meeting and how secretly it’s a bird shifter club. I also liked how bold all of the wildlife is at the college and how they aren’t afraid of humans which is strange to Simon but makes sense to everybody else that goes there since the college has one of the largest population of shifter students.

Simon is an Ornithology professor. He’s an academic genius and received his Ph.D. by the age of twenty and comes from a long line of academics. However, his family has a reputation in academia for their zealous and over publicized search for the Thunderbird cryptid. They have gotten proof of the Thunderbird, but every time the evidence is stolen, lost or goes missing just when the person goes public with it leading to embarrassment, shame, and besmirching of the family name.

When a position in the biology department becomes available at Cody College, it seems like fate to Simon. This will put him close to a recent sighting of the Thunderbird, and he wants to finally get proof and clear his family’s name in secret, of course. However, when a meet and greet article turns into an article about his family’s search for the Thunderbird, the head of the biology department assigns Simon a TA to make sure that he stays in line and doesn’t cause the college any embarrassment. His new TA is Ford Whitney. Grad student and part-time barista, Ford has a lot on his plate, and it’s his job to make sure that Simon doesn’t find out that shifters are real and that the college has the largest population in residence.

As Simon investigates the location of the supposed sighting of the Thunderbird, he runs into a group of people that want all of his research on the Thunderbirds, and they aren’t above trying to force him to give it to them. Ford will be forced to step in and save Simon and the secret about the shifters will be revealed. Simon will have to decide on what is more important to him, clearing his family’s name or saving the Thunderbirds by keeping their existence a secret.