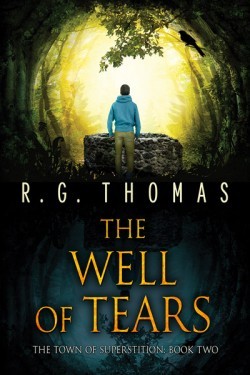 Sequel to The Midnight Gardener
The Town of Superstition: Book Two
Thaddeus Cane’s life changed when he learned he is the son of a witch and a wizard, and now he’s undertaken a mission to find his mother, who was cursed not long after Thaddeus was born. He enlists the aid of his father, Nathan; his boyfriend and neighbor, Teofil Rhododendron, a garden gnome; and Teofil’s mother, brother, and sister. As they journey through a world that seems normal on the surface, they meet many magical creatures, some kind and helpful, others evil and dangerous. When Nathan suffers a life-threatening injury, Thaddeus might be forced to abandon the quest to find his mother in order to save his father.

After discovering that he’s the son of a powerful witch and wizard, Thaddeus is on a quest to find his mother who’s been cursed by the evil Isadora. Thaddeus isn’t alone on this quest. Teofil, his gnome boyfriend, Fetter and Astrid (Teofil’s brother and sister), his father Nathan and Myriam (Teofil’s mother) are with him. But after a troll’s attack, Nathan is badly injured and sends Thaddeus alone in their quest to find his mother.

This sequel was as good as book one. Thaddeus is still trying to cope with the fact that supernatural beings exist and he’s one of them. With the help of his team and especially his boyfriend Teofil, Thaddeus became more confident and doesn’t hesitate to take charge.

I loved this book, it reminds me Tolkien with the Hobbit. It’s the same atmosphere, the quest, the supernatural beings, the legendary and all. I love Thaddeus’s evolution too, even if it’s not easy for him to understand everything, he stays strong and focuses on his quest. We also learn more about Teofil’s past and other fantastic beings.

The plot was super good with a big twist in the story that I didn’t see coming. Ok, I saw it coming but not exactly like it was, so I was surprised and sad too (read it, and you’ll understand). I can’t wait to read the next book and see how things evolved and I hope that they’ll kick Isadora’s ass.

It’s really a great series that can be enjoyed by everyone younger and older.