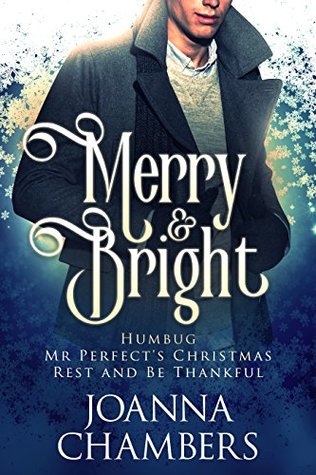 Humbug
Quin Flint is unimpressed when his gorgeous colleague, Rob Paget, asks for extra time off at Christmas. As far as Quin is concerned, Christmas is a giant waste of time. Quin’s on the fast track to partnership, and the season of goodwill is just getting in the way of his next big project. But when Quin’s boss, Marley, confiscates his phone and makes him take an unscheduled day off, Quin finds himself being forced to confront his regrets, past and present, and think about the sort of future he really wants…and who he wants it with.

Mr Perfect’s Christmas
Sam Warren’s new job hasn’t been going so well so the last thing he’s in the mood for is the obligatory office Christmas party, particularly since Nick Foster’s going to be there. Nick–the guy whose shoes Sam has been trying to fill–seems to take very opportunity to point out where Sam’s going wrong. But when Sam receives an unexpected Secret Santa gift at the party, he’s forced to question his assumptions about his rival. Could it be that he’s been misinterpreting Nick’s actions all along? And is it possible that his reluctant attraction to Nick is reciprocated?

Rest and Be Thankful
Things haven’t been going well for Cam McMorrow since he moved to Inverbechie. His business is failing, his cottage is falling apart and following his very public argument with café owner Rob Armstrong, he’s become a social outcast. Cam needs to get away from his troubles and when his sister buys him a ticket to the biggest Hogmanay party in Glasgow, he can’t leave Inverbechie quick enough. But when events conspire to strand him in the middle of nowhere in a snowstorm, not only is he liable to miss the party, he’ll also have to ask his nemesis, Rob, for help.

Merry and Bright is a collection of three short holiday stories by Joanna Chambers. This is my first time reading a story by the author, and I have to say that I enjoyed reading them. The stories were well written and brimming with holiday cheer and holiday morals about being a good person and stop being a Scrooge. I read them straight through, and it helped put me back into the holiday spirit.

Humbug – I liked this holiday story about Rob and Quin. I like how much growth Quin has to do to get to his HEA. He has some hard decisions and some soul searching to do, but with Rob’s help and support, he will make it. Quin is trying to emulate his boss’ behavior at work and wants to make partner. So far his attitude and drive to succeed has cost him a fiancé, but little did he know that it has also cost him his friends and coworkers. His coworker Rob points out what everybody thinks of him, and it really hits home when he goes out later that night to a club to meet up with his friends and overhears what they think of him also. When he flees the club without letting his friends know that he was there, he’s in a really bad place, and he runs into Rob from work. Rob knows that something’s wrong and refuses to let him be by himself. Will Rob be able to help Quin become the man that everybody remembers and the friend that everybody wants? 5 OptimuMMs

Mr. Perfect’s Christmas – I liked this story about Nick and Sam. I felt a little sorry for Sam and all that he’d been through and trying to fit in at his new job and trying to live up to his wonder boy predecessor, Nick, that everybody including the clients loved. Little did Sam know that the real reason that Nick has been popping in and sharing his knowledge and talking to his boss is because he has a crush on him not because he wants to make him seem inferior. Cute short story. I really enjoyed reading it. 4 OptimuMMs

Rest and Be Thankful – I liked this story about Rob and Cam. There hook up was hot! But the story left me wanting to know more. I had questions that hadn’t been answered like did Cam get his car fixed and find the money for the next loan payment and get his boiler replaced? These were all problems that Cam was facing, and there wasn’t any resolution on what happened after the blizzard. I want to know more about what happens next for Rob and Cam and their new relationship. 3 OptimuMMs