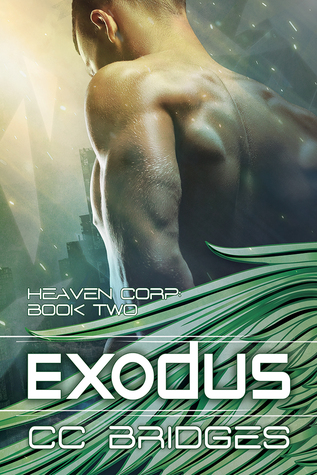 The truth could lead to war.
Henry “Hank” Abraham enjoys being one of the most sought-after personalities in Heaven. Life is good in the floating city for someone born to one of the wealthy and influential Founding Families. Hank parties with the privileged and beds someone different every night, flouting the morality laws that control the lives of the common people on the city’s lower levels. Then someone tries to kill him—repeatedly. Terrorists have Hank in their crosshairs, and his long disinterest in politics has come home to roost.
Ian Caldwell has been a security guard for the Abraham family for years. He survives the hypocrisy by sneaking away to the BDSM clubs on Earth to feed his baser desires. When he’s assigned to protect Hank, Ian pushes his attraction for his client aside. That kind of thing could get him reprogrammed. But he doesn’t count on actually falling for a man who isn’t as shallow and self-absorbed as he seems. Neither of them is prepared for the truth behind the attacks. Their journey will take them from Heaven to hell and beyond… and it might bring the tension between the classes to a violent head at last.
Second Edition
First Edition published by Dreamspinner Press, March 2014.

If you’ve read the first book in this series, then you’ll already be familiar with Ian and Hank. However, you don’t have to read the first book to be able to read this one as it’s written as a complete stand-alone. Although we do get to meet some of the characters from book one, this story is about how Ian and Hank first met and how their relationship began, so when we come across the other characters, it’s like meeting them for the first time.

Hank Abraham is a privileged socialite who lives with his family in Heaven. Hank is a rule breaker and likes to see how far he can push boundaries. He’s known for being a bit of a playboy, and whether it’s a man or woman in his bed, it’s all the same to him. As he’s the youngest child and not the heir to the family’s business, whatever he does, no matter how wrong, is usually ignored by everyone around him, even those in power. When Hank wakes up after a one-night stand with a woman he met in a club the night before, he tries to do his usual, which is sneak out before the other person notices. But as he goes to leave, his family security guard, Ian, is waiting outside the window in a vehicle for him. Again, Ian is the only member of security to successfully track down Hank when he was trying not to be found. As they pull away from the building, there’s a large explosion in the room Hank has just left from, which leaves him shaken up and confused. Ian is then assigned as Hank’s personal security by Hank’s mother, as he’s the only person that Hank seems to listen to. When another couple of incidents occur, Hank realises that it’s not just a case of being in the wrong place at the wrong time, and that someone is actually trying to kill him. With the help and expertise of Ian, they just need to try and figure out who and why?

Ian Caldwell grew up in Heaven, although in the lower levels of the 360’s. So although his life has been hard at times, it’s definitely not been as bad as the people from down below. Ian has always known that he was attracted to men, and in Heaven, this goes against all of their morality laws. The fact that Ian is also into BDSM and a Dom means that no one around him can ever find out about his personal life or he’d be taken to get his memories wiped and reprogrammed by the angels. Ian has worked for the Abraham family for many years, and although the youngest, Hank, can be hard to deal with, Ian always seems to be able to outsmart him, it’s an added bonus that Ian also finds him to be very attractive. And more often than not, his thoughts when around Hank turn to how he would like to have him over his knee, punishing him for flouting the rules. When Ian and Hank are forced to be together for an extended period of time due to attempts on Hank’s life, Ian finds himself becoming more and more attracted to Hank and the person he is behind his public persona. When Ian is unwittingly followed by Hank to the Downside and his BDSM club, and is then framed for something he didn’t do, he realises that to save both their lives and reputations, he’s going to have to make deals with the enemy and give up his valued privacy.

I really liked this book, even though I found it to be a little slow to start. I enjoyed getting to know the back-story of Hank and Ian, as I really liked them in book one. But it was quite strange to almost go backward from the first book instead of forwards. And from where they’re at as a couple at the end of this book and where we see them in book one, it still seems like there’s a lot missing. Even so, it was a very well written and entertaining story, that kept my full attention the whole way through. At the end of the book, there’s a little sneak peak of book three in the series, and I’m going to fully admit, I didn’t read it. I prefer the experience of finding out the storyline/plot of a book when I pick it up for the first time.

Personally, I don’t want to see the first few pages or chapter of the next book at the end of the one I’m reading, to me, it spoils it a little. But I will definitely be reading book three when it becomes available because this series has been so much better than I could have ever imagined. Also, if like me, you’ve recently watched and enjoyed Altered Carbon on Netflix, then this book will be right up your street.