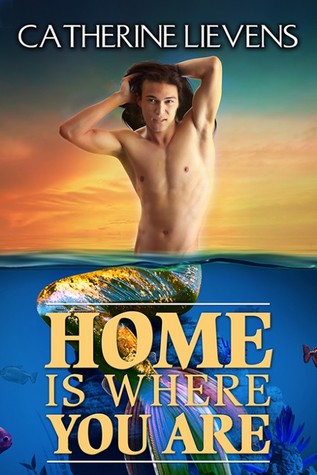 Ari is a merman who lives near Muir Beach, California. When he saves his only human friend from drowning, his existence becomes public knowledge, and he’s taken away from his home to be used as an attraction in an Orlando aquatic park.
Theo Delaney is human, and as soon as he finds out about the merman, he’s fascinated by him. He visits the park and decides Ari isn’t a fish like the park’s owner is trying to convince everyone. When one of the park workers tells him he’s going to try to free the merman, Theo wants in, and he’s the one who drives Ari back to California.
He hadn’t expected to fall in love in the process, though. How can he, a human man, and Ari, a merman, be together?

I loved Home is Where You Are by Catherine Lievens. This is a standalone book, and so it’s significantly longer than the author’s usual serial length books. So for all of the fans out there who complain that the books aren’t long enough, you should read this book because it’s awesome. Who doesn’t love mermen?

This book reminds me of two of my favorite movies that I loved to watch growing up, Splash and the Little Mermaid.
Ari lives in a small village and is living at home. He’s just become an adult, and he needs to get a job. He has to choose between being a builder like his dad or a hunter like his oldest brother. Ari yearns to explore and is fascinated by the human world. He even knows the human’s language thanks to his human friend Joe.

Joe had caught Ari in one of his fishing nets and had let him go, and they had been friends ever since. They have been meeting every week since then. But during one of their visits, Joe has a heart attack and falls overboard into the sea. Ari knows that the only way to save him is to get him to shore and scream for help.

Some of the locals see Ari and that later leads to him being captured, kidnapped, and sold to a Sea World-type aquarium where Ari’s destined to live out his days in a tank. Dennis who is assigned to take care of Ari finds out that Ari can speak and understand English and they become friends until Dennis is fired for feeding Ari more than he was supposed to be getting. Ari also meets a human who comes every day and sits and watches him through the glass, until one day the human sneaks through the employee access door and comes up and talks to Ari at the top of the aquarium. Ari refuses to talk to him, but he loves having Theo come and visit him and listen to him talk about his life. They become fast friends.

With the help of his new friends, Dennis and Theo, they will come up with a plan to get him back to California and home to his village. Renting a van with a bathtub in the back to keep Ari’s tail wet, they will journey across the country to get Ari back to Muir Beach. For Ari and Theo, it will be a bittersweet journey filled with growing feelings of love and the knowledge of just how impossible it will be to have a lasting relationship.

I loved the story and the house that Theo makes so that he can share his life with Ari is simply amazing. This book is more about Ari and Theo’s falling in love, and it is a slow burn filled with lots of handholding and kissing and just a little bit of rubbing but nothing explicit. I didn’t mind a bit, and I usually prefer my books to be on the more explicit side. But this one just made me feel warm and fuzzy. I really wish that Catherine Lievens would write more merman books and that her fans would give this one a try. I loved it, and I know they would, too.