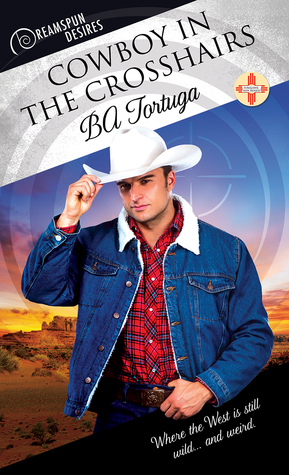 A Turquoise, New Mexico, Story
Once upon a time, a prince lived in a magical kingdom called Turquoise, New Mexico.
Well, really, TJ is a small-town police chief. Every Friday he holds court in the diner with the local holy roller, the art colonists, and the horsey people. But the Benes, who own the rodeo company, keep to themselves. TJ knows, because he was once hot and heavy with the oldest Bene son.
When Wacey Bene gets trampled by a remuda and comes home to heal, he’s none too happy to run into TJ, or his two little boys and their momma. The story might end there—if it wasn’t for some pesky bastard trying to kill Wacey.
The law steps in, and the townsfolk are cross about somebody messing with one of their own.
But once the bad guy is put away, can TJ and Wacey make their place in this wild and eccentric town a permanent one?

Cowboy in the Crosshairs is the first book in the Turquoise, New Mexico series and the fifty-third book in the Dreamspun Desires series.
I liked this story about TJ Cook, a small town police chief and Wacey Bene, rodeo circuit manager. Wacey and TJ were an item when they were in high school, but TJ was determined to be normal and have the whole white picket fence and family that went with it, including a wife and two kids. Wacey knew there was no way he could change his mind and so he left to manage the rodeo company that his family owned and planned never to return to Turquoise, New Mexico. However, those plans are shot to hell when Wacey has a bad horseback riding accident and has to return home until he is well enough to return to the rodeo. This puts him back in the same town as his ex, TJ, and it’s only a matter of time before they run into each other.

After nearly ten years, a lot has changed in Turquoise. TJ is the police chief and now has two kids and an ex-wife. One thing that his failed marriage has taught him is to be okay with his sexuality and be out and proud. He’s also a well-respected member of the community. Wacey and TJ didn’t part on the best of terms, and so their first meeting is very hostile and neither wants anything to do with the other. However, a series of accidents will keep throwing the two together and force them to get to know each other again and how they have grown up and matured while apart. With the accidents escalating will TJ find out who keeps trying to kill Wacey before they succeed? I know who did it, but you’ll have to read the book to find out for yourself.

There were a couple of things that were annoying to me, but they may not be annoying to you. I wasn’t a fan of Wacey’s name and how sometimes Wacey and TJ acted younger than they were supposed to be. I did like the chemistry between them, but I wish that the story had more than just the BJ scene. I would have liked a sex scene also. Overall, not a bad story but for me, I just wanted a little more passion.