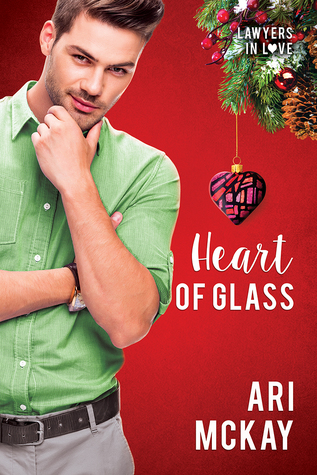 Fear of being like his unfaithful father has put high walls around senior litigator Asher Caldwell’s heart. Can former district attorney Zach Richardson knock them down to reveal the passionate man beneath the commitment-phobic workaholic, or will Zach’s own jealousy destroy what they’re trying to build?
A new life and a new love—that’s what Zach’s hoping for when he leaves the DA’s office and lets his friends give him a makeover. But the jury’s still out on whether the experiment was a success. His new look gets the attention of his boss and secret crush, Asher Caldwell, and leads to a seduction. Unfortunately, to Zach’s horror he learns that Asher assumed he was a paid escort. Asher is equally mortified to discover he had sex with an employee. Even so, the encounter meant a lot to both men, and they want to give dating a shot. Their romance born out of mistaken identity might work if Zack can trust Asher to be satisfied with the love of only one man… and if Asher can trust himself.

Heart of Glass by Ari McKay is the third book in the Lawyers of Love series. I absolutely adore this series. I’ve had the pleasure of reading all three of the books in the series. Although each book features a different couple that works for Caldwell and Monroe’s law firm, they can be read as standalone books. However, I love getting to see the cameos from the other couples from the previous books in the series and so reading the other books in the series will only enhance your reading experience but it isn’t required. I also love to fantasize about who will be the next couple to get their happily ever after.

I love Ari McKay’s style of writing. She has a way of engaging my emotions, and I feel like I’m part of the book experiencing what the characters are experiencing. Laughing when they laugh, crying when they cry, feeling their hurt and sorrow, and elation when everything works out in the end because they finally communicated and worked out their misunderstandings. And feeling how much they love each other when they give each other their secret Santa gifts for the office Christmas party. And their chemistry for each other leads to some very hot scenes.

In this book, we finally get to see who Asher Caldwell, senior litigator and one of the partners of Caldwell and Monroe, will fall in love with. Asher hasn’t had the easiest life. He had a father that pushed him to be the best that he could be and do the firm proud, but Asher and his father are like oil and vinegar and do much better after finally cutting ties with each other since they can’t be in a room together without fighting. However, this has left Asher with commitment issues and a fear of turning out like his unfaithful father. He has a no relationship rule and hires escorts to fulfill his needs. However, he will only sleep with each person once. A mistaken identity will bring him into the presence of Zach Richardson when he’s expecting an escort for the evening and instead gets a delivery of work papers from a lower level employee.

Zach Richardson has had a crush on Asher since he’d watched him during a case. He even changed what kind of lawyer he wanted to be, and he got a job working at Caldwell and Monroe. But alas, Asher doesn’t even know he exists. That is until Zach’s friends give him a makeover and take him out to a club. But he gets a call and being the lowest man on the totem pole it’s up to him to go and grab some important papers and deliver them to the Senior Litigator Asher at his home. However, when he gets there, Asher hits on him and who is he to deny himself the opportunity to have the one man he’s been pining for. The night means so much to Zach, but it isn’t until he’s leaving that he realizes that Asher thought he was his escort for the evening, and then it hits him that Asher didn’t feel the same way about him as he felt about Asher.

Asher finds out about his mistake the next morning, and after talking to Zach and clearing up the misunderstanding, Asher confesses that he would like to see Zach again and try dating him. Which for Asher that’s huge.

I loved how down to earth Asher is and how he’s up for doing anything on their dates, like going to the movies or going ice skating. He doesn’t put on airs, and it helps Zach with his insecurities about not being good enough for Asher. I also like how Zach takes Asher home to meet the family, and Asher finally gets to see what a loving family is supposed to look and act like. The book is a great addition to the series and shouldn’t be missed.