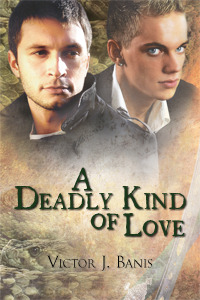 Nothing bad is supposed to happen in Palm Springs. At least that’s what San Francisco private detective Tom Danzel and his partner Stanley Korski believe. But when their friend Chris finds a dead body in his hotel room bed, Tom and Stanley drive out to help the local police investigate. What they discover is a gangster’s plot, a rather nasty green snake, and an elegant hotel that offers delicacies not usually found on a room service menu. The two detectives are going to have to rely on their skills and each other if they’re going to survive this very deadly kind of love

A Deadly Kind of Love is book 6 of the series The Deadly Mysteries. It can be read as a standalone.
Tom Danzel and Stanley Korski are two private detectives in San Francisco. They’re partners in life and at work. When Chris, one of their friends, calls them for help, they don’t hesitate to go to Palm Springs to investigate a murder case.
I liked this book; I liked it a lot.

Tom is an old-school man. He’s not talkative, but burly and very protective of Stanley. He’s an old-school cop also a kind of Dick Tracy. He’s also super straight, before Stanley, and even being with Stanley now, Tom isn’t really gay. And It’s funny to see how he tries to keep up with Stanley’s gay friends. Or Stanley.

Stanley is younger than Tom, not really cop material (even if he was a cop), he hates guns, not a real fighter, and he’s more cerebral actually. He’d also rather be anything except a cop or a private detective. But he loves Tom, and when Tom quit the San Francisco PD for him, Stanley couldn’t have refused to open their private agency.

I liked their duet; they were totally in tune.
The book was focused on the investigation and who the murderer was. It was funny and interesting to read, I liked how each time I thought of someone, bam, something happens and I was back to square one. The writing was fluid and dynamic, no boring moment or repetitiveness, I was in the story from page one and read the book easily.

Since it was book 6, and I didn’t read the 5 previous books (not yet). At first, I was a little scared of being lost in the story and the characters. Although that didn’t happen because the book can be read as a standalone easily. There’s enough information to understand who Tom and Stanley were and their past, but there’s not enough to spoil the previous books for you if you want to read them, like me now. I liked it, and I can read the previous stories now without them being spoiled.

The only thing that frustrated me a little bit was the absence of real sex scene. Since Tom is super smoking hot, I was super frustrated not to read a real sex scene. I need to really read the previous books, maybe I’ll be surprised…I’ll tell you.

It’s 4 OptimuMMs for Tom and Stanley