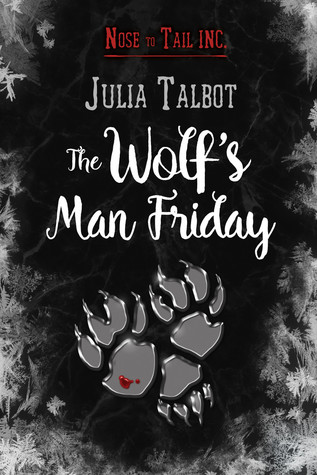 The last thing Sebastian Zeller wants is to be pack Alpha. But when the pack leader, his uncle Ron, is attacked, he has no choice but to leave his beloved Colorado mountains and fulfill his duty as Ron’s heir—at least until his uncle recovers. In the meantime, he intends to lure the attacker out… and make them pay.
When Ron gets wind of Sebastian’s plan to catch the attacker, he doesn’t like the idea of risking his heir. That’s where Jaxon Reedis comes in—he’ll balance protecting the dark and sexy werewolf with pretending to be his personal assistant. He’s walking a fine line that requires all his foxy wit and craftiness… and that’s on top of the inescapable feeling that he and Sebastian are meant for each other. When the attacker returns, will they be able to maintain their deepening bond when danger threatens to tear down everything they’re building?

The Wolf’s Man Friday is the second book in the Nose to Tail, Inc. series by Julia Talbot. I was of two minds about this book. I thought the first half of the book was kind of slow and a little bit confusing. I was a little bit confused with why Sebastian’s Uncle Ray was attacked and where they were and why they were only going to be there for a short time before going back to their pack territory in Colorado. I was also confused by the pack dynamic, but it was explained a little bit more in the second half of the book. I was also confused by the dialog between Sebastian and Jaxon. The story was written where it was like they could hear each other’s internal thoughts but only part of the time, but they never addressed it or explained if it was part of them becoming mates or something else. It was kind of confusing. I liked the book a lot better after Jaxon and Sebastian got together. I loved their chemistry and all of their sexy times together, and when they would cuddle up in their animal forms and groom each other.

I liked Sebastian. He was an interesting character although at times a little wishy-washy. He had moments when he was with his friend Alan, and he would act juvenile and reckless, then he wouldn’t want to be the next leader of the pack and only want to be a designer, but he wouldn’t stand up for himself and tell his uncle that. But then there would be times when he would have a very alpha personality. So yeah kind of a wishy-washy personality. Made it a little bit harder to like him in the beginning. He definitely didn’t have next leader potential, which is what the author was going for, so I guess she did a good job conveying that.

I loved Jaxon. He was the perfect portrayal of a fox shifter. He was fun and mischievous but knew when to be serious and protective. He’d gone to butler school to learn how to be a jack of all trades in addition to being a bodyguard. He was hired by Sebastian’s uncle to pose as Sebastian’s personal assistant and protect him after Sebastian’s uncle found out that Sebastian was trying to catch his attacker. I liked how Jaxon’s level-headedness is a perfect foil for Sebastian’s more impulsive nature.

I also enjoyed the end of the story, and I’m intrigued to find out what happens with Cheyenne and his twin Cinturon. I hope they get their own books and Alan also.