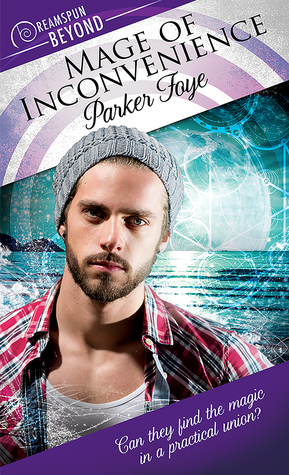 Can they find the magic in a practical union?
West is on the run from his werewolf pack, but if he cannot renew his magical defenses, he won’t get far. What he needs is a mage….
Julian is part of a wealthy and ancient family, and one day, his legacy will include his mother’s vast library of spell books—and the knowledge he needs to correct his past mistakes. But his inheritance comes with a stipulation: he has to be married before he can collect. What he needs is a husband….
West and Julian can help each other, and at first they don’t want anything further. But as they dodge meddling cousins, jealous rivals, and an insidious drug, it becomes clear that their lives are entwined in ways they never imagined—and they’re in greater danger than they thought possible.

Mage of Inconvenience is the first book that I’ve read by Parker Foye, but I liked the blurb, and I’ve loved the books in the Dreamspun Beyond series. And since this is the sixteenth book in the series, I figured I would give it a chance. I liked the book. I liked the author’s writing style and the plot. I also liked the characters. And while by the end of the book I could feel the love that the two main characters had for each other, I would have loved to have seen more passion in the book. However, the lack of sex isn’t going to keep me from reading more books from Parker Foye since I really did enjoy the book even if it only had kissing and a self-pleasuring scene.

West is a werewolf or as they are now called a “Meta” and has left his pack to live among the humans. He works at a dinner and keeps his head down and stays out of trouble. He found an abandoned cabin in the woods near town and is blessed that it has been protected by mage symbols. West is full of secrets which we learn about as the story progresses, although I would have liked more detail about why West ran away from his pack. The author glosses over the details, and we get bits and pieces of what happened. When something disrupts his defense system, he will need to find a mage to renew his magical defenses before his pack can find him. He calls the only person from his pack that he can trust. His best friend, Dana. Dana recommends the mage Julian.

Julian is part of a wealthy and ancient family and is a bit of a playboy. He doesn’t do relationships anymore after one resulted in a magical mistake that he needs his mother’s spell books to fix. However, in order to get his mother’s inheritance, he has to get married. So when West comes in to have his magical defenses renewed, it seems like the perfect fix to all of his problems. He gets a husband so that he can inherit and West gets a place to stay while his defenses are being renewed. Now doesn’t that sound easy? I bet they wished that it had gone so easy, but unfortunately it didn’t. And you’re just going to have to read the book to find out all of the things that they had to go through to get their happily ever after.